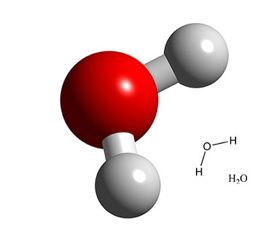 Hebrew is the language that Hash-m/G-d used to create the world – One difference between Hebrew and other languages. Another – Hebrew tells you of the essence of the object with the word.

One example Dog – in Hebrew is Celev. Adam, the first man, named the animals. Kol-Lev – means All Heart. Thus we see people picked up on this fact and say that “a dog is man’s best friend.” Is that expression true? Apparently not. But it picks up on the fact that dogs are loyal to their master.

Hebrew words tell you the Essence of object’s besides animals as well. Mayim is Water. In Hebrew it is spelled

Two Mem’s Connected to a Yud. This is strikingly similar to the chemical composition of Water – H20 – Two Hydrogen Atoms connected to an Oxygen Atom. A water Molecule looks like:

Another interesting Fact about water is that it expresses a wonder. In Hebrew Mah- Means “what?” In English it is called Water. Having the word “What” in it. Aqua – which used to be the French word for water – “Quoi” in French means what.

Hebrew is also the Mother of all languages. Many words from other languages resemble words from Hebrew – especially in English-related languages. They say that the Jews made the English language – because they were commissioned by the Romans.

Some similarities – Fruit in English is Perot in Hebrew. There is a whole book on the subject.

Remedies from the Hebrew Words of the Virus

For Example by giving tzedaka / charity (a physical act) to a worthy Torah sanctioned cause – one can create kindness to be showered from above (a spiritual act). It will also help them receive a better parnassa – income. Aser Ta’aser / עשר תעשר – You shall surely give a tithe. Our sages comment – give a tithe so that you will become wealthy – עשר כדי שתתעשר.

Thus both acts – physical and spiritual – are needed to combat ailments – lo aleinu / they should not come upon us. Obviously a person who is ill should seek medical attention – but there are things to do to help avoid that one gets ill.

If We call out to Hash-m to heal us sincerely – He will heal us. When we call Him – it doesn’t just mean to call out to Him – but do do things to come closer to Hash-m. One common remedy is teshuva / repentance to synchronize our ways with the ways of the Torah. How? See our article on Starting Over – wiping the slate clean.

In a verse in Parasha / Weekly Torah Reading Bo, where G-d sends the last three plagues upon Egypt & commands the Jews to do the Pascal Lamb offering – it states:

3. Have Honor for Synagogue Prayer

In America, on the 27th of Nisan 5764, a Jewish corona victim named Rabbi Kahalani died. Everyone was shocked and broken that such a dear and righteous Jew had departed. Following the virus that raged after the funeral, the deceased, Rabbi Kahalani, came to his son in a dream and said to him in these words: “My dear son, you know that the corona plague was born in the synagogue. And if you want to know why and how I received permission from heaven to come to you and reveal to you the secret of bringing the plague that drives your world down it is because I was careful with all my might, all my life not to speak in the synagogue under any circumstances, so it was agreed that I  Go down to you and reveal this thing to you! ”

Rabbi Kahalani finished in a dream and said to his son:
Know that this is why this plague in English is called COVID 19.

“Heavy” – because of the “honor” that they do not give to the synagogues and disregard prayer instead of honoring prayer. (And as we know, there are 19 blessings in the Standing Prayer [the Amida].)

The dream thing happened that week in which the Parasha / Weekly Torah Reading was “Kedoshim” in which it is written :
In Vayikra / Leviticus Chapter 19:30 – “You shall keep My Sabbaths and venerate My sanctuary: I am the LORD.

…
Before us again and again are signs from heaven about the reverence of the synagogues and the caution against speaking there. Indeed, it is up to us to eliminate this epidemic immediately …

By “The Connecting Light” (On the cause of the published “Corona” epidemic, by Rabbi Shlomo Levinstein, shlita. (From the issue “It is good to take refuge in G-d”))

A gadol – Rabbi Chaim Kanievsky – mentioned that we were sent out of the synagogues because of the virus – because of the lacking of proper decorum in certain synagogues. Thus we should make an effort to avoid speaking vain conversations in the shuls and have proper kavana / concentration in the davening / prayer. We are enjoined to attend our Torah shuls – but with the respect due to them. One lack of respect is refraining from attending the synagogues. (If one is healthy, fit and able to do so.) Attending an Orthodox Synagogue – is a respect for Hash-m.

4. Avoid Too Much Traveling

קָרָה. / Kara means – to happen, to transpire, to occur.

קָרָה. / Kara means – to happen, to transpire, to occur.

Kara Na’ can also mean – it happens by moving [from one person to another]. Meaning that is contagious.

A Rolling Stone Gathers No Moss. Apparently a person who is fit and healthy and exercising will be able to prevent or battle the corona virus. If someone is not feeling well- G-d Forbid – they should try exercising and being active physically. Those not affected can do exercise to avoid getting it.

קָרָה. / Kara means – to happen, to transpire, to occur. נָא / Na  – means  slender
A person should eat healthy to be in good health to avoid being susceptible to the virus.
See our other article on the subject as well.
Be well and stay well.