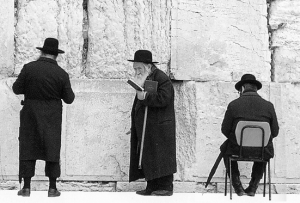 “All the children who ate lunch, you now have recess”

the teacher told the audience of little students in the auditorium.

“Those that remain go to the lunchroom.”

When G-d gave the 10 Commandments, He prefaced it with “I am the L-rd your G-d, who brought you out of the land of Egypt, from the house of bondage.”

The Seven Noahide Commandments apply to all people – Jews and Gentiles – to All Humanity.

What are these Seven Commandments?

The Seven Commandments for All Humanity

G-d gave Adam, the first man, commandments for him and all his descendants.

These are called the 7 Noahide laws or Sheva Mitzvot Benei Noach / Seven Commandments for the Children of Noah.

These Commandments are the basis of morality and world survival.

G-d gave them again to Noah, after the flood – thus their name.

He also explained them to Moses when the Jews received the Torah at Mount Sinai.

For A good book on the subject see “Path of the Righteous Gentile.”

A gentile who follows these commandments for the sake of the G-d of the Jews because they were written in the Torah, they get a portion in the afterlife. The Torah is eternal, so attaching oneself to Torah one also attaches oneself to eternity.

The Only Time in History that G-d Appeared to an Entire People and Gave a Law
There was only one time in history where G-d appeared to an entire nation of millions of people and gave them a document with very specific laws of conduct – when G-d gave the Torah to the Jews at Mount Sinai about 3,300 years ago. G-d gave laws for Jews and laws for gentiles.

In the Torah – it explains in detail what these laws are. Only the Jews have the proper interpretation of the Torah, because when G-d gave us the commandments and the Written Torah, he also gave us an Oral Law – to explain the written Torah. The Oral Torah was written and is now called the Talmud. Thus any interpretation of Torah that does not follow the laws explained in the Talmud is not Torah.

A person who follows these laws because G-d gave them in the Torah – is called a Ben Noah and will inherit a portion in Heaven.

The 10 Commandments for the Jewish People

The Descendants of the Abraham, Isaak and Jacob are the Israelites. The Jews descend from them. The Israelites were in Egypt for over 200 years. The Egyptians made them slaves. G-d took them out with a mighty Hand. After they left G-d gave the Jewish people the Torah. All the Jews – Millions of People – heard G-d Himself speaking.

The giving of the Torah – the Law – was a national revalation of G-d. G-d never appeared again to a Nation. G-d does not change his mind. So the Torah is always in effect. Moses brought down the 10 commandments.

The 10 Commandents are only for the Jewish People.

A gentile does not observe the Sabbath. Although a Gentile does not learn Torah it is a Mitzvah / commandment for them to learn about their laws – the 7 Noahide laws.

A Gentile that feels an an affinity to Judaism and is sincere can convert to become Jewish after guidance, learning and conversion with a reputable and competent Orthodox Rabbi. A Jew can never convert out of Judaism. They will always considered Jewish by G-d – regardless if they went through the process of “conversion” to another religion and are thus obligated under the 613 Torah commandments. A Jew is considered a person whose mother is Jewish or converted according to Torah Judaism.

For Info on the the TEN COMMANDMENTS see:

For More Info on the 7 Noahide laws

4 thoughts on “Ten Commandments or Seven – Which do You Follow?”