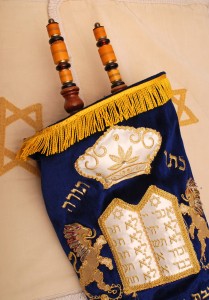 The Hebrew language is different. In other languages words that are usually arbitrary describe an object. In Hebrew, however, the language itself describes the essence of the object.

Man’s Best Friend
Hash-m gave Adam – the first man – the task of naming all the animals. Their names describe their essence. He called the dog – “Kelev” – which is an acronym for “Kulo Lev” – all heart. Recognizing this attribute, some call the dog “man’s best friend.”

Water
“Mayim” means water in Hebrew. Water in it’s natural state on earth has no definite form. It takes the form of the container. Thus the Hebrew word for water contains the word “what” (“mah” – what in Hebrew). Since it has no form – What is it?

Hebrew is also the “Mother of all languages.” Take the word Mayim – it is related to the English – for water also has the English word “what” in it. In old French water was called Aqua – which also contains the word for what in French – “Quoi?”

The Hebrew word for water is “mayim” it is spelled mem – yud – mem. There is a mem in the beginning. A yud in the middle. In the final mem at it and. So if you were to imagine that it is two same letters attached by one letter in the middle. This is similar to the chemical composition of water – H2O. There are two hydrogens attached to one oxygen atom.

Fruit
The word for fruits in Hebrew is “Perot” – the letter Peh in Hebrew is synonymous with the letter Pheh. Peh is a Pheh with a dot in it. Thus fruit comes from Perot. In French also fruit is fruit. There are many other examples in which words from other languages are based upon the Lashon HaKodesh – “the Holy Tongue”.

Sound waves and Letters
The letters of Hebrew create sound waves that look like the letters that are pronounced. There was a study done by Yakov Guggenheim – that used software to discover this phenomenon. See the wonders of the world – by R. Zamir Cohen or Read His Book – The Coming Revolution – Science Discovers the Truths of the Torah

Your Hebrew Name and Your Essence
The Hebrew name of a person also describes their essence. If a person is interested in finding out what their essence is and what their particular purpose is in life – one can examine their Hebrew name to see if there were famous Jewish Torah personalities that also had the same name and a similar goal. Also a person’s Hebrew name is also encoded in a verse of the Torah that may describe them. The Vilna Gaon mentioned that every Jewish person’s life is described in the Torah.

Codes in the Torah
An article in “The Journal of Statistical Science” spoke about this – that many contemporary rabbis names and dates of their birth or deaths are found encoded in the Torah. Several books have also been written on the subject.- like – Cracking the Bible Codes by Jeffrey Satinover. For more info on Bible codes click here

Also starting at Shemot 11:9 is encoded the name of one of Maimonides’ works, the MiShNaH TORaH. From the Mem in the name Moshe in Shemot 11:9 count 50 letters to find a Shin. Another fifty letters you find a Nun and another fifty, a Heh. So where is “TORaH”? Count 613 letters from the Mem in Moshe, you find a Taf. From that Taf keep counting every fifty letters, to find the rest of the word TORaH. There are also many other encodings including names (Adam, Kain, Abel, Aaron etc.), places (Israel, Babylon etc.), plants, as well as many other words. In many instances the encoded words are related to the subject ot the paragraphs that they are in. There are also other ways in which information is encrypted in the Torah.

Gematria – The Numerical Value of words
The value of a Hebrew word can be calculated using Gematria – A method of disclosing the hidden meanings of a Torah or text according to the numerical values of Hebrew letters or of substituting other letters of alphabet for them in accordance with a set system. (ie, aleph =1, yud = 10, Kuf = 100) The numerical sum of the letters in the Hebrew word HeRaYON (pregnancy) totals 271, which is the length of a normal pregnancy in days.

— The numerical value of YaYiN (wine) and SOD (secret) are both equal to 70. Hence the saying, “when wine enters, secrets are out.” (Talmud)

— Jacob in his dream saw a ladder which reached from earth to heaven (Genesis 28:12). The ladder is SINAI, for SULAM (ladder) and Sinai have the same numerical value, 130 (Midrash Genesis 68:12). Thus, the Law revealed at Sinai is the ladder which leads from heaven to earth.

Hebrew – The Power to Create
Hebrew has the power to create. Hebrew is the language that Hashem used to create the world. Like it says in Pirkei Avot (Ethics of the Fathers) – Chapter 5:1 “With 10 utterances was the world created; what does the Torah come to teach? And could it not have been created with the one saying? Rather, it was done to collect [payment] from the wicked that they destroy the world that was created with 10 sayings. And to give great reward to the righteous that they uphold the world that was created with 10 sayings.” We see from here that Hebrew words can also create.

1 thought on “The Wisdom of the Hebrew Language”