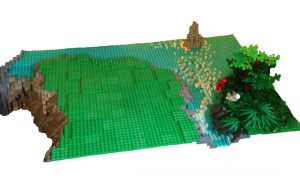 It was a camp raffle. The prize – a new Lego set – Truck and command center. The little boy davened / prayed to Hash-m. He won.

He asked his father to build it with him.

His father – reluctantly followed him to the Lego set sprawled out on the sheet.

When he started he got into building. The father started telling his son “pass me this piece.” until finally he finished the truck.

What do you learn?

Firstly – it is important to connect with children. It is not just giving them the toy – but helping them to build it. You are not just building Lego. You are building a relationship. Connect with things that he or she are interested in.

Also – prayer of a pure child or a sincere prayer to Hash-m / G-d works. The child prayed & won the set. We can pray too – even for little things – a parking space, that you can find one more bottle of your favorite drink, that you pass that test…

Sometimes you don’t want to do something. You take the first step and you get into it. Many don’t want to step into an Orthodox synagogue. Take a step in. Ask the rabbi to learn something with you.

Things you can learn from Lego:

Build one vehicle at a time. – choose a task and concentrate on that task. Better to work on it than to multi task.

Dump the Lego pieces on a sheet – put all the pieces you need in one place so that you can easily complete the task and not lose one – or lose your time searching for it in the middle of a task.

Separate Lego into piles of similar colors. Then separate the large pieces and small pieces. This will help you find the pieces you search for more quickly. – Separate your tasks into similar tasks. separate large tasks ad small tasks. Do the easy tasks first. Or break the big tasks into digestible smaller tasks. When you see the small tasks – the big task doesn’t see the task as so daunting.

The non-achievers will see what they could have accomplished as a small mound and cry and say – wow i didn’t know it was so easy to accomplish that which I thought was so hard.

You can do it. Just break it down and take the first step.