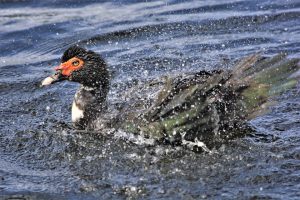 Many years ago, I spoke with a man who was in the process of divorce. He had some kind of argument and he mentioned the word “Divorce.” The woman didn’t take kindly to it. The woman changed her attitude from one of tolerance to one of vengeance. One word triggered her.

Is Divorce always the man’s fault? I think that a man can usually save a marriage. Is it his fault? His wife also does damage. That could also be the man’s fault because he could have did more research or soul searching before he married his wife. He could have looked into how she deals with people (and vice versa) and made a decision with his mind rather than his heart or desires.

A man recently wrote a book on the subject. The article about is is called “This is How your Marriage Ends.” He mentions some of the concepts above.

A man is usually less insulted by slights than a woman. So taking a slight to his honor – may be easier for him than a slight to woman. Also they get insulted in different ways. A woman considers a man who does not consider her needs – as a slight – even if he said nothing. If the man does nothing – it is not nothing. A man who wants to save or maintain his marriage is obligated to help around the house.

A man who answers the question on a date for marriage – will you help around the house – with a snide remark, or a hesitating yes or a not really – is starting off on the wrong foot.

A man who seeks to feel where the woman is coming from is starting on the right foot. Even though a man may consider trivial what a woman considers as important. He should understand that like a child is so upset for a candy that he or she did not get – it behooves him to take seriously her wants and needs – emotionally, physically and spiritually.

Yaakov / Jacob Avinu spends much time convincing his wives that it was time to leave their father’s house and go to Israel. Until they felt it in their hearts – he kept on explaining.

Empathy and feeling for a wife’s challenges will help a man maintain a healthy marriage. This can be done by understanding her. He can repeat what she says like – if she says “I had a hard day at work.” He can say “You look like you had a hard day today.” so that she will feel that the husband understands where she is coming from. Parroting words – while including feeling her travails with your heart – will reinforce a marriage.

Let her insults slide off you. Don’t respond to her insults with yours. You are interested in calming the situation. The person who is in emotional control has the upper hand. Your goal is not to win a fight or to show your right. Your goal is to have peace at home.

We mentioned in another article that – having peace with a wife is a positive Torah commandment. A wise man will think “Is it better for me to respond to her insult? or is it better to refrain and accomplish a positive commandment from the Torah