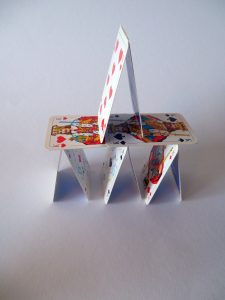 Some people believe in ghosts and rid themselves of ghosts.

Some live with ghosts and let them haunt them throughout their lives.

A person chooses to rid themselves of their bad experiences. Yes people need to talk. Yes you can help others get over it. But ultimately it is the choice of a person to live their life based upon their belief system or assumptions.

Let’s bring it down to examples.

What Do You Assume that Influences You?

My friend told me that his mother didn’t want him playing in a small strip of trees behind his house about 10 feet wide. She told him “Don’t go in those trees. There are bears in there!” He lived on long island. Bears don’t roam Long Island. He was frightened enough to not enter the tree patch. He told me till today as an adult he is afraid of entering that small swath of trees.

“OK” we say “I am happy to say I am free of assumptions.”

The Belief in G-d

Is My Religion True?

A Rabbi – Rabbi Ron Chaya [who speaks in French] was asked a question – does a particular religion have a basis for it’s truth?

Before answering he prefaced by asking – what is the difference between Belief and Knowing. He lifted a pen and said this Pen I know it exists. Belief means that I assume it exists – but I could be wrong or I could be right. Knowledge is a higher level knowing. Belief is a much lower level.

He said Jews don’t Believe that G-d exists – they know that G-d exists. He Mentioned that just as if A = B and B = C – then A = C, we know through many proofs that G-d surely exists.

Some proofs of G-d derived by answering simple questions life – How could the world come to existence through random molecules? Was a Human eye (or any eye for that matter) formed by random interactions of atoms. Or is it more likely that an Infinitely Wise Creator made man? Ask a statistician – how likely would it be that random molecules floating around will form a human eye.  As then – how probable statistically that more molecules came and randomly formed billions of eyes found in the world.

This is one proof. Many exist.

He answered poignantly – No religion has a basis for following it’s truth except for Torah Judaism. He explained that even non-belief is an assumption.

What does it matter?

Well imagine a family living a life with an assumption that they were poor. Little did they know that the stocks they had purchased as a young couple were worth millions of dollars. At retirement age they open the safe to find stocks worth hundreds of millions of dollars. They skimped pennies every day of their life, reused teabags, recycled cans to receive extra $2.00 a week. Pity – they could have used the money to help their unemployed son start a business. They could have paid for a nice house for their daughter – because they assumed they were poor.

A person can live a life and in the end find truth. Yet at times their system is  so ingrained in their way of their life they would rather live falsity than deal with the ice cold truth.

A person can be poor spiritually. They follow a lifestyle their entire life and in the end they find out the truth was to be found elsewhere. Some follow the religion of their parents – because their parents did it. Or because it is convenient. Or because it is politically correct. The main question we can use to break out of the assumptions of doom is 3 words “Is it truth?”

To say Mount Everest is a high mountain doesn’t do it justice. Calling G-d / Hash-m “Smart” doesn’t do Him justice. Everything you can imagine about his smartness – He is smarter. But to simplify things – Lets say “G-d is Smart.”

Obviously a smart being would give the possibility to any person in the world – be them simple or intelligent – to find the truth. Abraham, our forefather found it. But how can an average person find the truth?

The 4 Questions to Break The House of Cards

Basically 4 questions can bring you to truth.

You provide the answers. If you want the answers I came up with press here.