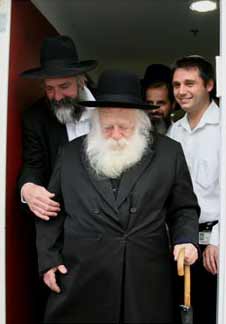 A man suffering from paralysis of half the face – possibly Bell’s palsy ailment – where half the face droops – came to Rabbi Chaim Kanievsky, zt”l. He explained his disorder to him and asked for a blessing. Rabbi Kanievsky thought a moment and asked the man “Are you willing to wear a beard?”

After some contemplation – he replied “Yes”.

R. Kanievsky said “it Says in the Torah ‘VeHadarta Penei Zaken'” (Vayikra / Leviticus 19:22) – you shall honor the countenance of the elderly – meaning you shall respect an elder. Words in Hebrew have vowels separate from the consonants. The Word Zaken (Zayin, Kuf, Nun) can also be pronounced Zakan – meaning “beard”. Taking the phrase with those vowels now the verse would read ‘VeHadarta Penei Zakan’ – which changes the meaning to “A Bearded face will be Beautified.”

He grew the beard and the slowly his Bells Palsy was cured.