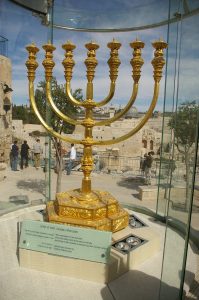 He outlawed Circumcision, Rosh Hodesh / the New Month, and Shabbat. The Jews fought back and after a war lasting almost 25 years – Hash-m gave victory in their hands – they won the war. The major miracle was the Jews’ victory over the superpower of that time – Greece.

We know that in the end – when the Jews come to purify the Holy Temple / Beit HaMikdash -they find one jug of oil with the seal of the Cohen Gadol / Chief. This oil, that is supposed to last one day, lasts eight days.

G-d Loves the Sincere Efforts of the Common Man

The Rambam says that if the Mizbeach / Altar is broken – one is not required to light the Menorah. The Greeks broke the altar  So why did they want to light it? There was no Mitzvah / commandment to light the Menorah. It was just a commemoration – to remember the Mitzvah. So why did G-d make a miracle if they weren’t even doing a Mitzvah? Apparently, G-d appreciates even the small, sincere efforts that a person makes to establish a connection with him.

My friend told me a story of a woman who ordered a “Kosher” Hot Dog for her son in Manhattan on Passover. On Passover we are forbidden to eat bread. She was very adamant that the vendor not put the Hot Dog on the bun. “Don’t Touch the Bread with the Hot Dog!” I am sure that Hash-m had satisfaction from that woman’s sincere effort to avoid allowing her son to eat Hametz – leavened products on Passover.

Build What Others Want to Break

I was listening to Rabbi Shaked Bouhdana. He mentioned an interesting point. Antiochus outlawed Circumcision, Rosh Hodesh / the New Month, and Shabbat. The Jews fought hard to have the freedom to do these Mitzvot and others. It turns out that Hanukah Lasts 8 days – the same amount of time a child born waits to be circumcised. Since Hanukah lasts Eight days – it is sure that at least one Shabbat will fall during Hanukkah. There is always a New Month that falls on Hanukkah. When we fought for a Mitzvah that others wanted to outlaw – we won by having a greater level of sanctification for these three Mitzvot.

If we use our forces for the positive growth spiritually we gain in a greater way than what we originally had.

Some people are fragile. Send one word out of place – and here comes the fire. Someone asked me how to deal with difficult people. I said – we shouldn’t look at people who upset us as our enemies. Ultimately – our deeds that we sent out are boomeranging back to us.

If we got angry at a spouse – this anger will find it’s way back. So the smart thing to do is to recognize this principal and when someone lashes out at us – realize that that might be the fruit of our previous misdeed. So if we lash back at them – it is akin to a (pardon the comparison) dog biting a stick that was thrown at him. We bite at the stick – the person who lashed at us – but we forget that we were the one who initially threw the stick.

Fight fire with water – not fire. Calm the situation. Don’t fuel the fire.