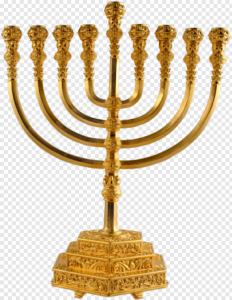 Yaakov / Jacob took the right of the first born & blessings from Esav / Esau, his brother. Esav wanted to kill Yaakov. He went to make peace with Esav. The Night before his meeting with Esav – Esav’s Angel encountered Yaakov and wrestled with him till the morning. The Angel encountered him when Yaakov was going back over the river to get some small jugs he forgot.

By Morning time the Angel had to leave to sing praises to Hash-m. Yaakov – told him to bless him and also asked his name. The Angel told him he would no longer be called Yaakov – but Yisrael – for he wrestled with the Divine and won. When asked about his name he responded “Why do you ask my name?”

The Angel was the Evil Inclination – the Satan. Why did he come to attack Yaakov at this time? He had many other opportunities to attack.

Yaakov was going back to retrieve the small jugs of oil. It represented the spark in each and every Jew that cannot be tainted. Some say that the Jug of oil was the actual Jug of oil that was used for the miracle of Hanukah. The angel wanted Yaakov to give up hope on this spark of holiness. Yaakov struggled for all the sparks of holiness – even in a Jew that is very far from Judaism. He still had hope.

When the Romans conquered the Jews and wanted to ransack the Holy Temple in Jerusalem – they were afraid to enter. They sent in a Jewish Informant against the Jewish people. They told him – anything he found he could take. He went in and took the Menorah. They said that is a prize of war that they wanted to keep to show their victory. They told him to take something else. He refused – he said I angered my G-d once – I don’t want to anger Him again. They threatened him with death. He died as a Martyr not to anger Hash-m.

How is this? Several minutes before he was willing to ransack the Temple – in one moment he changed to become a Very Righteous Jew – who gave his life for the Sanctification of Hash-m’s name? The answer – the holiness of the Temple inspired him and removed all of the coverings of impurity that covered that Holy spark within him.

Every Jew has a holy spark within him or her. They just have to uncover it. A Jew should never give up on spirituality – a connection with Hash-m. They are closer than they think.