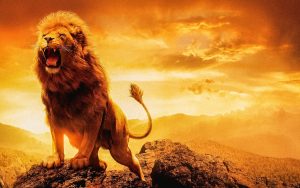 The Month of Father

“Av” in Hebrew means father. We would expect a month that is named Father to be a month of consolation and happiness. Let’s break down the month into parts. The first 9 days lead up to the destruction of the first Beit Hamikdash / Holy temple – by the Babylonians and also to the Second Beit Hamikdash over 600 years later.

The sign of the Month of Av is the Lion / Leo. One signification of this period is we will be more successful if we rise and reinforce our spiritual efforts – in becoming closer to Hash-m – as would a lion rise to chase it’s prey. This month comes before Elul – whose sign is a pure maiden / Virgo. In the month of Elul Jews do Selichot – prayers asking for forgiveness and purification from sins. We thus get ready for the Month of Tishrei – The Month of the Scale / Libra – when all human beings are judged by G-d.

The Second Part of the Month

The second part of the month starting from the 15th of Av – callled Tu – B’av – were days of rejoicing. Half the month passed and now difficulty turns to rejoicing. The young maidens would dance before the single men – so the young men could search for a suitable wife and court suitable young woman in search of a mate for marriage. Like it says:

There never were in Israel greater days of joy than Tu B’Av and Yom Kippur. On these days the daughters of Jerusalem used to walk out in white garments which they borrowed in order not to put to shame any one who had none …

The daughters of Jerusalem came out and danced in the vineyards exclaiming at the same time, “Young man, lift up your eyes and see what you choose for yourself. Do not set your eyes on beauty but set your eyes on [good] family.” As it says, “Grace is deceitful, and beauty is vain; but a woman that fears Hash-m, she shall be praised.” (Mishlei / Proverbs  31:30) (Talmud: Tractate Ta’anit 26b)

“No days were as festive for Israel as the 15th of Av and Yom Kippur,” for there is no greater joy than having one’s sins forgiven – on Yom Kippur for the sin of the Golden Calf and on Tu B’Av for the sin of the spies. In the Book of Judges, Tu B’Av is referred to as a holiday (Judges 21:19).

The First Part of the Month

The first part of the Month deals with doing acts of mourning – how can we reconcile the difficulty with the the Name of the month “father”?

In Eicha / Lamentations – it talks of the destruction of Jerusalem. One of the verses says – “All who pursued her arrived at her.” (Eicha 1:3) Torah verses written in Hebrew can be understood in various ways according to the permitted ways of understanding Torah. It can also be read “all who pursued Hash-m / G-d – arrived – to Her.” (“The Divine Presence” – G-d has no gender – at times He is Referred to as male and vice versa.)

In a Jew’s Life the Goodness of G-d is always present – In good times and the reverse. When the Jewish temple was being destroyed – someone peaked into the Kodesh HaKodashim / Holy of Holies – the most holy part of the Temple. Inside was the Aron / the Ark of the Covenant.

The Reason of Suffering