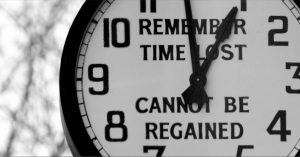 You want to get work done. Procrastination and distraction are major productivity breakers. I know.

Being Productive by Removing Barriers

To be more productive short-term & long-term we try to find ways to break the productivity breakers. One major step in the right direction is to get a flip phone instead of a smart phone. Many executives made the move and found afterwards they focused more on business than distractions.

To break the breakers we must know what activities causes the most time wastage. Is it surfing the shopping sites? Is it communicating with whatsapp? Is it talking to friends over the phone at work? You decide. Write down 5 and focus on those.

An idea to break the productivity breakers is to establish rules and stick by them. At times I tend to get distracted. So I made a rule and put it on my list of tasks on my email software – that has a simple task manager – like “No talking to friends on phone during work before clearing desk.” Obviously dealing with non-work related issues should be kept to a minimum. But breaking the habit or establishing a good habit takes concrete steps – like the one above and dedicating a short time – let’s say 2 minutes daily (for continuity) towards the goal.

Those are the short term habits. Work habits. We also can use the same system for personal habits. Like taking 2 minutes a day to express appreciation to one’s spouse or children or parents.

The Torah provides laws to be most productive in life. It says in the Torah – that a person only transgresses – when a spirit of folly enters their mind. If a person thought out thoroughly their actions before they did them – they would come to the conclusion that the way of the Torah is best.

Examples of Gain vs. Loss

One commandment for both is “Do Not Steal.” A person who gets away with stealing – may gain in the short term – ie, the money they stole. In the long term – they put themselves in a situation of worrying about being caught, covering their trail, losing their reputation, losing their job. Is the $1000 gained worth the worry? No.

A Jew observes the Shabbat. We do not write, light a fire, initiate electricity, etc. Some go shopping instead. So what did they gain? A good sale? What did they lose? A time to connect to spirituality – ie, connecting with Hash-m / G-d. A time to connect with family and friends. The Loss outweighs the gain.

Torah – In Best interest of Man

The Torah – written by Hash-m / G-d – is made in the best interest of man on a personal, community and global level. What we gain by following Torah allows us to live a more productive life.

I have a friend. He said when he was a youth – he followed the way of the world. He had girlfriends, toured the world – enjoyed the high life. He complained that while he was “living it up” – others were establishing families and building their future. He expressed regret. Some – learn quickly and correct the errors of youth and eventually align themselves with Torah values. Some don’t.

To be most productive – to become the best that you can – G-d / Hash-m gave us the Torah. A good place to start for a Jew is by learning the Pirkei Avot / Ethics of the Fathers and about the 613 commandments. For a Gentile – the best palce to start is to learn about their 7 Noahide commandments. That is a good start to live a productive and meaningful life.