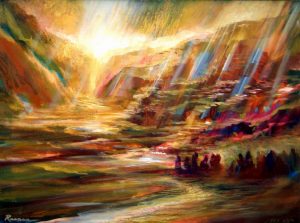 The Jews were in Egypt for 210 years. They were a free nation that was gradually lured into slavery. G-d had to take them out quickly – for them not to remain with a slave mentality.

After the plagues – The Jews with somewhat of a mentality of fear were reticent to enter the desert with Moshe. G-d put his divine presence upon them. With this great holiness – the Jews were motivated to leave Egypt to receive the Torah.

After Hash-m / G-d split the Sea of Reeds into 12 tunnels, Jews traveled through tunnels towards mount Sinai to receive the Torah.

When they exited the tunnels, G-d took away this Holiness from them. They had to work for the Holiness – that was previously given to them as a gift.

The way for them to receive this great holiness, spirituality – and happiness – was them to work on themselves for 49 days to receive the Torah. These 49 things are the 48 ways to acquire Torah – as mentioned in the Pirkei Avot / Ethics of the Fathers / (chapter 6, mishna 6). After doing this – working on one trait a day – and all of them on the last day – they received this Holiness and were able to receive the Torah from G-d Himself at Mount Sinai. That was the only time in History that G-d spoke to entire Nation – the Jewish Nation – of Millions People.

He said we too can receive this Holiness according to the Ari”zl / Rav Yitchak Luria. There are 4 steps for a man to receive it:

One who does so can receive this special holiness.