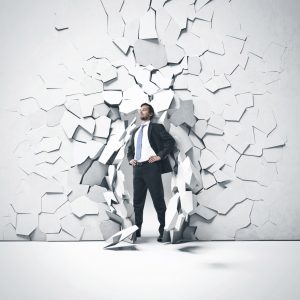 I feel many people feel restrained in life. They see insurmountable barriers – that sometimes do not exist.

They put themselves in a box and repeat “Only If” All their lives.

At times a person tries but spins their wheels.

There are 3 Dimensions of Barriers – The Material, the Mental and the Spiritual.

The Spiritual Barriers and Measure for Measure

Let’s start with the Spiritual Barriers.

No. G-d is not Punishing you – The Law of Gravity

A person may think that G-d is punishing them. But it’s not so simple. A person would not say that after dropping an expensive vase on the floor – G-d is punishing me because my vase broke. You dropped the vase. The vase fell and broke because of the laws of gravity. You put yourself into the situation that in normal circumstances the vase will break if you drop it. You cannot blame G-d for that – for allowing the laws of gravity to pull your vase to the ground.

The Torah says do not rely on miracles.

The law of Measure for measure

A person who constantly ranks out his associates and his workers under his supervision – should not say – why is G-d punishing me by giving me a wife that yells at me. He put himself in a situation that is close to a cause and effect situation. He yelled at others, so others will yell at him. It is not a punishment – it is the spiritual law of  nature – he is invoking by his negative attitude.

So the correct action to remedy his wife’s torment is to be kinder with others.

This will affect a change in the spiritual dimension for you to deserve kindness in return for your kindness.

I heard recently a Torah Shiur / Lesson regarding a person who was searching for a wife. He was in his mid 30’s. He still didn’t find the right partners.

He told his rabbi of his problem. His rabbi asked – do you believe that Hash-m sends the right shidduch / marriage partner – ie, matches are made in heaven?

He responded – Yes. The rabbi asked – did anyone of your past dates ever do something to break off a marriage with you. He responded Yes. He asked him “Did you forgive that person?” He replied – no. I can’t forgive her for what she did to me.

The rabbi replied – that is a lack of faith in Hash-m / G-d – if you believe that G-d directs the world and that all that G-d does is for the good – then even that break-up was directed by G-d and was for the good. So you have no reason to hold a grudge against that former date. And since you beleive that it was the girl that hurt you – you lack belief in G-d’s providence. Forgive her and see what happens.

The boy forgave the girl in his heart. A short time later someone introduced him to a girl that he ended up marrying.

His faith in G-d – affected G-d’s providence to send the right one.

Basically it comes to – you create your world. If you want a world of kindness – be kind. If you want G-d’s providence – let go of your grudges.

The Torah teaches the spiritual laws of nature. Pirkei Avot teaches many of them.

When getting my MBA, I was a fellowship student. I worked with a professor that was at that time in tune with the quality improvement revolution. I learned about tools of quality. One tool is called “Force Field Analysis”.

You have a project – idea. You have things working with you and pushing against you.

Make things easy. Put the name of the idea or project on the table in writing. Draw a line down the page. On one side of the page Identify and write the “Forces For Change.” On the other side write “Forces against Change.” Assign Scores to strength of each force. Write out ways to assure that the positive forces overcome the negative forces. Analyze and Apply solutions.

People like to please others. Good. But Really pleasing others is secondary to pleasing G-d by having the Torah as a guide. If the Torah is one’s guide – so you please both G-d and people.