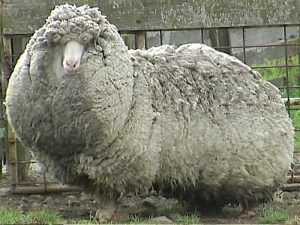 A Sheep lost in the forest. He survives on his own. 6 years later they find him – unshorn for all that time. His fleece covers him to the extent of it becoming a walking ball of wool.

He made news and broke some records with almost 40 kg of wool.

Apparently sheep need man. Without man you would have many more afro-sheep.

The question’s that arise are:

1) Was the sheep made for man for him to have nice wool suits and clothing?

2) Or was man created for the sheep – to shear it?

3) Or was there no creation? The sheep came into being by random molecules colliding together.

So there must be a creator.

But perhaps you will say man was created to serve the sheep.

We would have to ask 2 other questions to determine – what creature was created for whom.

1) Who gets more benefit from the other – the man or the sheep?

The sheep gets food from man and gets sheared by man.

The man gets wool for warm clothing, carpets, blankets and more. Apparently man gets more benefit from the sheep than vice versa.

2) Who gets more benefit from the world – man or other creatures?

Trees don’t need man. They can live in their forest all their lives – be irrigated by rain – without need of human intervention.

Yet man does need trees – for building homes and other structures from their wood; for getting warmth by burning wood.

Fruits don’t need man. Man needs fruits for nutrition. Fruits and vegetables are the perfect size for man – that a man can hold them in his hand(s) and transport them.

Sound does not need man. Man does need sound to communicate.

The sun does not need man. Man needs the sun for warmth.

You choose your creation and see if it benefits man or if man benefits it more.

Apparently the world was created for man. This can be determined by logic.

If evidence shows that the world is primarily serving man, this points to the existence of a Creator that created man and his surroundings for his benefit