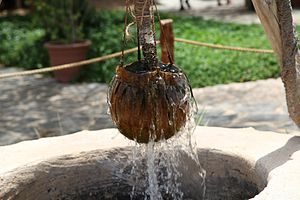 We encounter several stories of people getting married in the Torah – each teaching a life lesson. In the Torah – we have Yitzhak marrying Rivka.

Avraham, the father of Yitzhak,  told his servant Eliezer – he does not want a girl from Canaan. He told him to go to his family and search for a girl there. He didn’t want a girl from Canaan because apparently they did not have the proper Middot – character traits he was looking for. The Canaanites were known for their immorality.

Searching for and Finding Kindness

Eliezer, when he goes to find a girl for Yitzhak, prays to Hash-m saying – “May the girl that I ask for water – if she not only serves me water but serve my camels – be the girl for Yitzhak.” A simple test. Apparently his test was entered around looking for a wife for his master’s son that loved to do Hesed – Chesed. A foundation of Judaism – to do acts of loving kindness – was one test that she had to pass. At the well of water – he finds a girl that does just that.

Was Eliezer an Animal Lover or searching for someone going beyond the call of duty?

Perhaps you will ask maybe Eliezer wanted a girl that loved animals. Why did he want her to serve his camels as well? Apparently – Eliezer also wanted to find out if she was not only concerned about his thirst – but his tiredness. He was tired after the voyage and Rivka was concerned about his physical condition as well. She didn’t want him to strain himself to also give drink to the animals. She saw that he was thirsty and tired. With one question she discerned his needs and tended to them.

You can also say that Eliezer wanted to test her to see if she was following Halacha / Jewish law. There is a law to feed the animals first before eating. Rivka gave enough to drink to Eliezer to satiate his thirst (for he was in a condition to warrant his being given to drink first), then she gave water to the camels to fulfill the law of feeding the animals first.

So he had several tests to find a wife for his master – Did she do kindness, to go over and beyond what was asked of her? Did she follow Jewish law? Did she have the Hashkafa / Outlook of the Torah – that she understood that Eliezer should be given first in this situation?

Finding someone with Similar family traits

I don’t know if we can derive this – but it seems like from the desire of Avraham to find someone from His own family, we see that he recognized the importance of searching for a mate with similar family values and possibly similar land of origin values.

What comes first Love or marriage?

In Yitzhak’s case the Torah says that he married Rivka and then he loved her. In the case of Yaakov marrying Rah’el – it says he loved her and then he married her. Either is possible. Love at first site is not a requirement to get married. Love may take time to develop – sometimes years.