The Third Beit HaMikdash / Holy Temple is to come down from Heaven. The Jews yearn for the rebuilding of the Temple in Jerusalem since the destruction of the Second temple in the year 70 Common Era (C.E.). 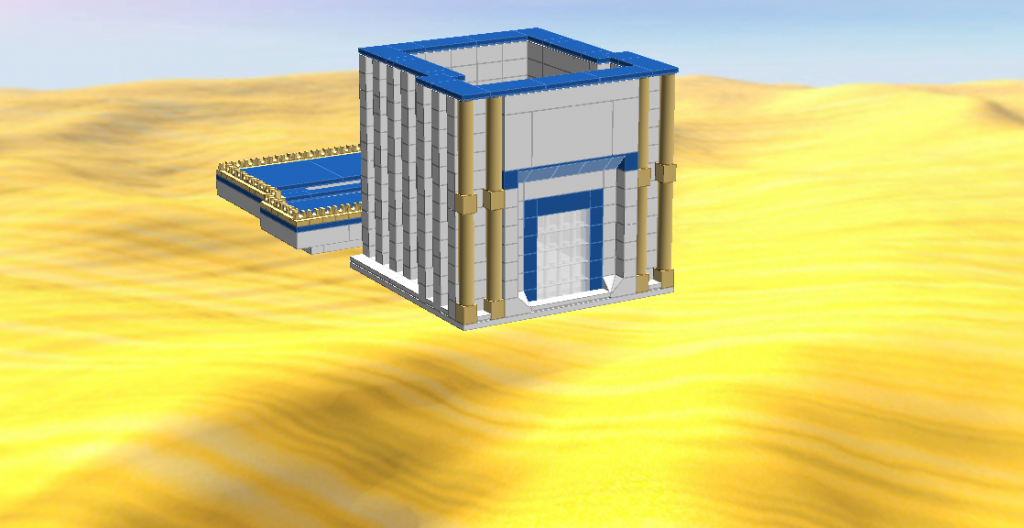 The picture above is a Model of the Beit HaMikdash in Lego designed on Lego Digital Designer (LDD). LDD is a free program downloaded at the Lego site that allows you to design Lego models on a computer and saves files in the LXF format. If you want the lxf file of the model above please contact us at info@jerusalemlife.com. It doubles as a Tzedaka Box.

Reasons for Yearning for the Temple

Two – is that G-d / Hash-m – who created the world and took the Jews out of Egypt – will be recognized by all people as the true G-d of the world. Observant Jews recognize the constant good that G-d does for us daily and yearn for other people to love, fear and worship Him.

Here are ways to help rebuild the Holy Temple.

1. Stop speaking badly of others. Speaking badly is called Lashon HaRa (Evil Speech). Even if a fact is 100% true – if it is derogatory – we should not repeat what we heard about a fellow Jew. Some take upon themselves one hour to not speak badly of others a day and build up from there. The Chofetz Chaim wrote various books on the laws of guarding one’s tongue. Many are Available in English from artscroll.com, feldheim.com and the Chofetz Chaim Heritage Foundation. Make a 5-minute daily Lashon HaRa learning session with friends or family.

2. Do Acts of Kindness – the 2nd temple was destroyed because of Sinat hinam (Gratuitous Hatred). To remedy this we do acts of Gratuitous love. Acts of Hesed / Kindness. Some make it a habit to do at least one act of kindness to someone else – daily.

3. Jews Observe the Shabbat & Non Jews Observe the 7 Noahide laws. If all the Jews observe 2 Shabbats in its entirety – the Jewish people will be redeemed. Jews and Gentiles may be saved through attaching themselves to Torah.  If there is a war Gentiles and Jews can be safeguarded by observing the 7 Noahide laws and the 613 commandments respectively as stipulated in the Torah.

4. Make Peace between others – Have a grudge against an old friend or family member? – forgive and forget. Send a messenger – if you don’t feel up to it – to apologize and make amends. Send a text written by yourself, a friend or a spouse. Make sure it doesn’t refuel the fire but extinguish the fire between you. One of the laws of the Torah is to love your fellow like yourself.

5. Yearn for the Rebuilding of the Jewish Temple / Beit Hamikdash and pray.

How do you yearn? Pray. Learn about the Beit HaMikdash. Build a model of it with Lego. I ordered a Model of the Beit Hamikdash printed from a 3D printer online. It was less than $20. The Lego model above doubles as a Tzedaka box / Charity Box. Giving Tzedaka to a Torah cause can also help to hasten the redemption. You can give to Ohr Binyamin or other worthy causes found in our article of: Worthy Torah Causes

The great rabbis say that we are in the messianic age. Our actions will determine whether it will come sooner or later.