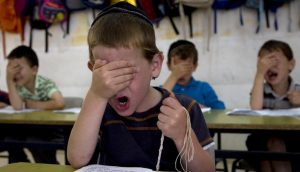 The boy who cried wolf. We all know it. He shouts out “there is a wolf!” People run to help. He played a prank. He plays the trick again. Less people come. The third time, a real wolf appears Shouting for help – no one comes. He loses.

Nice parable. Nice Moral. Tell the Truth and people will listen to your words. It applies to selling, selling on-line, politics & daily life. Tell a lie once too much and your credibility is shot. People will buy the first time. Make some quick sales. But if truth is not present, in the end, the business will falter, the religion will fall, the politician will lose.

Through truth one can come to realizing their potential.

Once a thief met a Rabbi. He said “Rabbi. I want to do Teshuva / Repent.” The Rabbi offered him advice: “Don’t do or say anything that is not truthful.” He accepted this upon himself. He wanted to steal – but he said “I promised the Rabbi I would be honest.” He wanted to lie – he couldn’t because of his promise. He wanted to cheat. He couldn’t. Eventually, apparently he became an outstanding member of society.

The secret of the lier – to not get caught – is to mix truth with lies. Mix them and people will be more likely to accept the lies. But in the end the lier will lose. Either because he will be discovered – in his or her lies or he or she will discover that they lived a life of untruths.

The Pain of Living without Truth

That is the story of the rabbi who was by the death-bed of a cardinal of a church. The cardinal was questioning his religion, he asked the rabbi – now that the prophesies of his religion were proven wrong – by the Jews returning to Israel – did he waste his life by following it? The rabbi, at this juncture, knew that this was the moment of truth, it was not the time to mince words. The rabbi replied “Yes.” The man died in great suffering.

We exposed 4 questions for anyone to arrive at what is the true Law of G-d. We came to the conclusion it is the Torah. But not everyone is following it. Why? Not convenient. Not my cup of tea. I’m good the way I am. My parents brought me up differently. My religion is not that one.

Finding Yourself Through Truth

Thus, a person who wants to be on the right train, would be better to follow truth – regardless of if it is convenient or everybody is doing it – or I can find one rabbi that approves of it. If it goes against the spirit of the law, why do it. It is more convenient? As the Jewish people, we want to do what is right in G-d’s eyes, even if it is not convenient. That is Na’aseh veNishmah – We will do [first] and we will [then] understand.

But the real point is – that following a true path will not only lead you to having clients that trust you, but it will allow you to live a more serene life. A person has no cognitive dissonance when one follows truth. Maybe G-d doesn’t want this of me.

Fine follow the path that the government allows you, but remove from your serenity. Once I was an assistant to a university professor. The professor assigned a paper to be written on one’s hero in life. Surprisingly, the heroes that most of the class wrote about was their parents. Apparently, psychologically a child wants to please their parents. It gives them comfort and boundaries. G-d is our parent, when we please him, we feel this comfort. When we do not, deep down, we feel upset – although it may not appear on the surface.

Telling truth – one is not afraid of being caught in a lie. You don’t have to make calculations of your words – whether they contradict another white lie one said. One is frank. One is open. One is candid. No worries.

Coming to your Own Conclusion

We attempt not to convince one what to do. We expose the paths that you will be able to come to the true realization of who you are and discover your potential. One of these ways is only following truth.

Being Yourself – Questioning Your Own Lifestyle

A person who questions their motives and actions can reach a higher level of existence. Some Jews have the custom to review their deeds at the end of the day to see where they faltered and where they succeeded in terms of the good deeds. Then one can decide small steps for self-improvement. Drastic change is not necessary. Yet, having the Torah or a truthful, Torah authority involved to teach you what is good in the eyes of G-d will help.But one must be open-minded, flexible and humble enough to accept the word of Hash-m, even when it contradicts their way of life.

Let’s look at parents who consider putting a child in a Torah day school. Many people will say – well my children get a free and very good secular education. “What do you think Rabbi?”

Take a person who follows the crowd – I follow what is popular – to be popular. But did one ask himself – is this taking away from my true identity? Is following what is chic, popular, attractive, acceptable by society – what we really are. To live a more satisfying life, is to question – is the way I dress true to myself. Is the way I act appropriate. Is the way I think good in the eyes of G-d? G-d wants each person to be himself. He did not create man for them to be a robot.

A Rabbi I know said – “A person who tries to be like someone else, doesn’t become like the other person. He is not himself. He becomes a nobody.”

I meet people at times that say they are open-minded, yet that act similar to parrots. If they are with a friend, they mimic what the friend does. If they subscribe to a particular newspaper, they parrot the opinion of the newspaper. When someone challenges their opinion – they become ruffled and are not accepting of conversation regarding the Torah view. So much for open-mindedness.

What to be truly open-minded. Find an orthodox rabbi that you feel is truthful. Discuss your issues with Him. Find out what he thinks about the decisions you must make. Let him be a sounding board for what is right or wrong.

Following truth will allow you to find true serenity. One is happy when he follows the way of G-d.