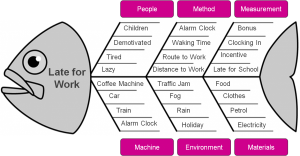 I remember the Quality Revolution. America’s Auto industry – in the late 70’s and early 80’s – took a beating from the Japanese. The Japanese were selling top quality vehicles – while America’s quality was average. After loss of market share the Americans awoke. Now the Americans have caught up.

Before the war, Japanese products were low quality. But when the world gave them funds to rebuild their infrastructure after the war – they decided to better themselves. The Japanese were willing to learn from anyone. Even the Americans.

This comes from Torah – in Pirkei Avot it says – Learn from everyone. “Who is Wise – A person who learns from every person.”

General MacArthur involved in the rebuilding of Japan called upon two key individuals in the development of modern quality concepts: W. Edwards Deming and Joseph Juran. Both individuals promoted the collaborative concepts of quality to Japanese business and technical groups, and these groups utilized these concepts in the redevelopment of the Japanese economy.

The the Quality Experts – Deming & Juran – were not into talk – like mottoes for improving quality – but for improved methods and means. They used various Approaches to improve quality including Failure testing, Statistical control, Shewart cycle, continuous improvement & Total quality management. The methods they used included the House of Quality, Fishbone (or Ishikawa / Cause & Effect) Diagram , Force-field analysis and other quality tools. Many quality tools and methods are useful for a person to improve their character traits.

Continuous quality improvement – comes from a Torah concept that each person is to evaluate themselves at night – their positive and negative acts to determine how they can improve. Also a person is to be better Tomorrow than they were today.

One of the key components of the Japanese method was deciding by consensus. Instead of taking a vote to decide on important quality matters – they used a method to all come to a common consensus – what is the right path to choose.

A Jew Studies Torah. They sometimes learn in a group or one-to-one. Head-to-head learning is called a H’evruta. Usually people learn Talmud together, but they also learn Halacha / Jewish law and other topics in a H’evruta. In a H’evruta the goal is to get to truth & understanding. If it doesn’t make sense it is thrown out or rejected. The two discuss & discuss until they both understand what is said in the Torah.

This method came from the Torah when G-d Told Moses to explain the laws to the people in a clear fashion, so that they would understand it – not just learn it by rote. People would discuss, ask questions, raise objections & apparent contradictions – until the law would be clearly understood.

The Japanese – in their culture – uses this method – used by the Jewish nation – for business. Thus they became experts in quality. As the Jews that Study Torah diligently are experts in Ethics – for they pick apart and delve deeply in the word of G-d – the guide of all Ethics – the Torah.

Just like the Japanese were smart to consult the experts regarding quality. Those who search for sincerely for true ethics would be wise to consult the Experts – the Torah Scholars.