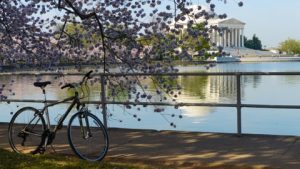 In my youth, our family took vacations with my cousins in Washington, DC. They really lived in Silver Spring – Maryland. But we called it Washington anyway.

I would hang out with my cousins. We would go on trips together. We roasted marshmallows by their fireplace. My older cousin would tell me spooky stories with a funny ending. On Shabbat I would take long walks and talks with my cousin. For some reason we would end up by some parking lot – when we would then return home.

My uncle – Jacques – married to my father’s sister – would welcome us. We were part of the family. At the Shabbat Table and in general – he would tell puns and jokes that required some thinking. We dubbed them “Tonton Jacques Jokes.” (“Tonton” is Uncle in French).

One of his classics was when we were walking on Rosh Hashana to do Tashlich on – when we go by a body of water to release our sins – like it says in the Pasuk / Verse in Micha 7:19 :

He will take us back in love;
He will cover up our iniquities,
You will hurl all our (iHeb. “their.”) sins
Into the depths of the sea.

Walking to Tashlich, Tonton Jacques turned back to us and said with a smile “Depeche Vous!” / Hurry Up You (pl).

Peche in French Means “Sin”. “De” as a prefix in French – like in English means to remove – like in Desalinate. His words had a double meaning – “Hurry Up” & “Remove Your Sins”. I guess the joke is funnier when you hear it in French.

Tonton Jacques loved to buy old stuff from the auctions. I remember walking into his office. He had all these neat machines. Once he took me to an auction. I eyed one of the items – it was a spiffy motorcycle. Although – I was around 10 at the time – I really wanted him to buy the Motorcycle for me. I imagined myself riding it. I hinted to him – wow – that motorcycle looks like a bargain. He didn’t get the hint. I think He ended up buying a box full of miscellaneous office items. I was upset – but I got over it.

Looking back I am grateful he didn’t buy that Motorcycle. I don’t think the police would have taken kindly to a 10-year old riding a Motorbike. Also – it is safer to drive a car. I also wanted a car in Washington. I was attracted by the Triumph TR7. But that faded as well.

I didn’t get the Motorcycle – but I did take some serious bicycle trips in Washington. I would take a bottle of water and some Moroccan cookies and went riding into the city. Once I ended up next to Walter Reed Veteran Hospital. I didn’t know how to get back. No GPS in those days. No Cell Phones either.

I was lost. I wasn’t so observant when I was young. But I did pray. I remember connecting to G-d. I spoke with Him in my own language. I remember praying once when walking to school “G-d – if You exist – make a lightening bolt strike next to where I am walking far enough for me not to get hurt.” Lightening never struck. I didn’t see the proof of G-d that way – but I saw it in other ways.

I needed help finding home base. Hash-m kept me – a young boy lost in the streets of Washington DC – without a helmet (it wasn’t required by law those days) – safe.

I knew my cousins lived by Second Avenue in Silver Spring and 16th street. I guess I asked some people and I found my way home, Barukh Hash-m.