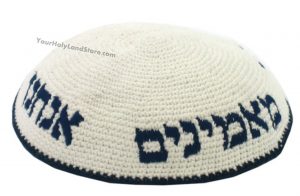 My friend is a traveling salesperson. He sells yarn to retail stores. He told me that one Knitting Club had a sign posted: “No Political Discussions Here.” I heard many offices and schools apply the same creed.

We applied the same message in our synagogue.

Once people started discussing politics at a friendly breakfast in the dining hall. One was a Republican – the other a Democrat. Each was touting their candidate. One became offended and left the synagogue and never returned.

It was too bad. He was a nice man. He had much to gain from Judaism.

Now – no more politics in our shul. Yes we limit “Freedom of Speech” in order to have peace in the synagogue. Want to discuss politics? Go outside – go to a restaurant – but not in our Synagogue. A synagogue is a place for peace – not quarrel. A place to grow – not a place to stagnate with ideas that bring people no where. You will rarely convince the other party that you are right. What will you be left with – bad feelings.

The Evil inclination / Yetzer haRa came to Noach / Noah before the flood and wanted to enter the ark. “I’ m sorry you can’t enter the ark. You have to enter as a couple. Where  is your mate?” he told him. The Evil Inclination searched around and decided to marry Quarrel Mongering. Noah let them in. Eventually – they had a baby. They called it Politics.

Vote – very good. Write to your congressman. But political discussions are rarely lucrative. I met a person who refused to marry a person with different political views. I asked what if the person you meet is kind, sensitive and has the right Torah values but would vote for the other candidate – would you refuse matrimony? He explained he wouldn’t think it would be a good match.

“Lev Melech BiYad Hash-m” (Mishlei / Proverbs 21:1) King Solomon – the wisest of all men – said “Like Channeled waters, the heart a king is in the hands of Hash-m / G-d – He directs it to whatever he wishes.” G-d directs the heart of the rulers to achieve His own purpose. (See Commentaries on the verse.)

Many a time a parent is very adamant upon their views. What do they teach children – to hate people with views different from theirs. To argue. To adopt the views and “morality” of society.

They spend their time trashing others – so the children learn its alright to insult others – like their friends and family.

Being too much into politics also detracts from one’s Torah learning. If one is constantly involved in political discussion – the opportunity cost is losing time to learn Torah. The Torah what it means to be Jewish. It teaches:

Political discussions may turn off people – like potential friends, old friends or potential marriage mates. It may get a person so involved that people lose sight of the priorities in life – getting married with a Torah-minded mate, doing kindness with others that may not share your political views, establishing a Torah family, etc.

My recommendation to any politically opinionated person : Spend at least as much time studying Torah as you do expressing your political views. Many sites exist. You will live a more serene life – a life full of peace, love and understanding. See our links section for a list of sites. Gentiles can take time to learn about the Torah’s 7 Noahide laws for all humanity.