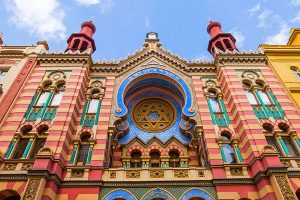 Hating those who Do not agree with You

The other day I was on a Clip-art site. Someone posted a piece of art that was against same-gender marriage. Some of the other artists jumped on this person – calling him a hater, a “racist” and other hateful terms. I thought of analyzing the comment conversation. This person basically posted the opinion of the Torah. Same-gender marriage or relations are forbidden for Jews and Gentiles. Because I don’t agree with a person – I don’t have to hate him or call him a hater.

Respect the Person – but not the Opinion

Because a person has another opinion than you – the Torah says you must respect the person but not his point of view. I am against many things that people do. But I do try to respect them as people. Perhaps one day they also will come to understand that The Torah was given for man to perfect himself or herself. The Torah was given to have better personal relations.

Jews hate the sin – not the Sinner

Jews don’t hate the people who do commit these acts. In reality we feel badly for them.

Figuring Out the Reason for G-d’s Position

An intelligent person will think “If this law about Homosexuality (or any other Torah law) is in the Torah that was written by G-d – so there must be some Justifications against it.” You just have to figure it out – if you don’t understand.

People usually take the – feel bad for the underdog approach. That is good. G-d also takes the side of the underdog. But First the intelligent way to pursue is to take the opinion of G-d as stated by the Torah. And if I don’t understand – or don’t agree – my opinion should defer to G-d’s opinion – for He knows more than me.

Some do the opposite. They to force words into G-d’s mouth – see the conservative, reform and other movements. G-d gave the Torah. It is forbidden to drive on Shabbat. The other movements said “No. It is better that people be able to drive to synagogue.”

That law spelled the destruction of these movements. People who drove on Shabbat – drove right passed the synagogue into the shopping center. Or drove to another synagogue abandoning their local synagogue.  Many of their congregations fell into disuse – because they changed the law of G-d. n the Torah itself it says – do not add or subtract from the laws.

Some hate Jews because they think they can’t live up to G-d’s Torah laws. So they hate – to justify their unwillingness to submit to G-d’s will. The Jews take the blows for their unwillingness to follow Torah. But we will be rewarded for it. In any case a person should understand why they hate a person and try to make peace with themselves – by understanding the other person.

A Jew should not hate another Jew. The only time that it is warranted to hate another Jew is if they sin to anger G-d. Most people are not in that category. The reason why most people in the world do not follow Torah is ignorance. Most Jews today are in the category of Tinok Shenishba / a child that was taken captive at a young age – so they are not fully responsible for their lack of observance.

Personally, I think if Jews did start learning Torah – they would start to observe at least some aspect of it. A very important point is – that if certain aspects of Torah are too challenging for a person to adhere to at this moment –  a person should not reject Torah on that basis. They should be mature enough to say – that aspect is above my ability for now but i will strive in other aspects that are easier until I can.

Unfortunately, many years ago – people said – let’s attract more people to Torah by changing the Torah’s laws. That is mistake number 1. Why? Because Torah was given by G-d before millions of witnesses. So its divinity is difficult to challenge. No other religions claims that their “bible” was given by G-d to millions of people. Only Judaism.

So to disagree or want to change the laws of G-d is counter productive. G-d thought out his law more than anyone who tried to find reasons to disregard Torah.

A Jew is to follow 613 commandments of the Torah. A Gentile is to follow 7 major categories of laws called the Noahide Laws / Sheva Mitvzot Benei Noach.

In the Torah Killing is prohibited. Why because G-d said so. In Nazi Germany they made laws to allow killings of Jews. If laws aren’t based upon the word of G-d as stated in the Torah – killing can be justified – like many religions did so in the past to further their cause – like in the inquisition, the crusades, the intifada, etc. Their laws are not based upon Torah – so they justify Killing innocent people.

The Torah says hate the sin not the sinner. Hate the philosophy – if it is against Torah. But not the people. If G-d says something you do not understand in the Torah – ask a reputable Torah scholar to explain. They will. Hating a person for an opinion is contrary to Torah – unless they are spiteful against G-d. Try to Understand the Position of G-d and live a more peaceful and lucrative life.

Many people who were the haters – what did they accomplish? Hatred. Anyone can do that. Making a better world through Torah is really our Job. Jews have the 613 commandments & Gentiles the Torah’s Noahide laws. That is the real starting point for a better world.