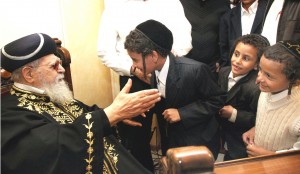 Rabbi Ezra Attia, was a head of the Yeshiva (Rosh HaYeshiva) of Porat Yosef in Israel. He had a star student that was extremely gifted, bright and diligent. One day he noticed that his student was absent.

Inquiring, He found that his student was at his father’s grocery store. The Rosh Yeshiva went to the store. He found his student with an apron, tending the store. Rabbi Attia asked “what brings you here? We did not see you at the Yeshiva?”

“My father needed me to help in the store.”

Rabbi Attia asked him for his apron and wore it himself. He said “I’ll take care of the store – You go and learn Torah.”

When the student’s father saw the Rosh Yeshiva with the apron, he was puzzled. “My Honorable Rabbi, what makes you don this apron?” he asked sheepishly.

He replied “Your son is brilliant. I told him to go to the yeshiva to learn Torah while I will tend to the store.”

The father was taken aback “No. I will not hear of it. Please forgive me. I will send my son to the Yeshiva and find someone else to take care of the store.”

That student eventually became Rabbi Ovadia Yosef, ztz”l. He helped thousands to enroll in Torah Schools – by going door to door to explain to parents the importance of a Torah education.

He became the Chief Rabbi of Israel. He guided and inspired people, politicians, doctors and rabbis.

He started an organization that created a network of Torah schools in Israel. He taught Hundreds of thousands of people Torah weekly. He was instrumental to give pride to Jews in their Judaism and Sephardim in their heritage. He learned Torah many hours a day learning the works by heart. He gave guidance to thousands of people yearly. He loved his people and helped them however he could.

At his funeral – according to conservative estimates – 850,000 people attended. The greatest amount of people at a funeral in modern-day Israel.

His dedication to learning Torah.

Learning Torah helps a person grow and allows a person to reach their potential and purpose in life.

If we were to imagine if Rabbi Ovadia Yosef – stayed as a clerk in his father’s store – what would he have accomplished? Perhaps he would have taught some people Torah and become the head of his father’s company. Perhaps 800 people would have attended his funeral.

But he reached heights uncommon for the common man through – Torah learning – especially the learning of Talmud.

This is the secret for a person to become a success.

In society – some people say clothes make the man or money makes the man. But we can easily discount this. Let’s say a person has the most expensive suit’s – $20,000 – tailor made. He is a billionaire. Is he a success? Many would say – yes.

But what if he is rotten with his employees, yells at his wife and children constantly and uses scheming tactics to make money?

Success? Obviously not. A person’s growth depends on becoming a greater human being. According to Torah this is comprised of three things:

Torah study is so essential – as we see in the example above.

For men – Talmud study is recommended. There are many orthodox synagogues that offer Talmud study courses. One can also learn over skype or over the phone with a partner.

For Women – It is recommended that they learn Jewish Laws that pertain to them and other Torah Topics – like Parasha – weekly Torah reading. Torah Books abound for women at most Torah bookstores.

For Gentiles – it is recommended that they learn the laws of the 7 Noahide Comandments with a reputable Torah scholar or organization.