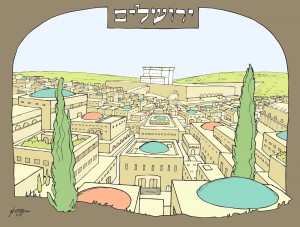 The Ninth of Jewish Month Av is a Day of National Fasting and Mourning for the Jewish Nation.

How it Started
It started when the Jews were to enter into the land of Israel in the Desert. When they heard the report of the Spies about the land, they started crying. The Jewish people fell for the report of the spies. The spies used dishonest reporting tactics to evoke fear in the people.

Learning More
Here are some links that might make you feel the magnitude of the day. Learning about it – we can appreciate it more.
Tisha B’Av: The Secret to feeling the Mourning.
Tisha B’Av – General articles

Improving our Self-Esteem
Apparently, the reason why the Jewish people cried was because they lacked confidence in themselves to overcome their enemy. Lack of confidence in ourselves was also a reason for the sin of the Golden Calf. These two incidents are related.

We must look at ourselves as members of an important and Holy Nation – chosen by Hash-m to teach the world the beautiful messages and way of life of the Torah – through our actions. We have to have confidence in ourselves as a nation and as individuals – for we are the children of the King of Kings – veritable Princes and Princesses. (order the Free “You are Special Card”)

When we see that we are the King’s Children and we are trodden upon, insulted, hated, and disrespected – it in itself is a reason to mourn.

Teshuva / Repentance
The fasting is to be able to feel the seriousness of the day and to do sincere Teshuva (repentance).
(Some Articles on Repentance)

Thus we should work on creating more peaceful relations between us and our co-workers, us and our families, us and our friends. When we focus on gratuitous love instead of gratuitous hatred – This is a when Hash-m will send his anointed one – the Messiah – to redeem us from the subjugation of the nations.

Let us remember and mourn for they say that the one who mourns for Jerusalem will merit to see it being be rebuilt. It Should be rebuilt Soon, in Our Days. Amen.

Now we are like the King’s children banished from his table – but soon we will lift our heads in pride again.