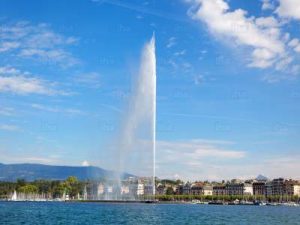 I used to live in Geneva, Switzerland in a nice, quiet, quaint studio – not far from the Synagogue. The people were friendly. When just I got there, They gave me advice – where to shop, the Kosher Restaurants, the supermarkets, the tourist sights – the Jewish community. They told me about the transportation system. I learned my way around town.

But there was a certain store to avoid – they said. Their prices were high. There were other stores that were much more reasonable, but further away. So once in a while when I needed the goods they had, I would travel a distance to purchase the goods.

One day i became acquainted with the store. I found that it had good prices and good quality. The store owner was quite a friendly man as well. But when I finally decided it was worth the while to go to that store, it was too late. I was soon to be returning to the United States – for I finished the project for which I was hired.

I learned from that experience to not always believe what you hear. People exaggerate. People have biases, hatreds, bad experiences. What might not be good for them, might be good for you.

But more importantly – I learned in order to find truth you must seek it sincerely. Not just take everything as truth because someone said it. Yes take words of people with a grain of salt – unless you have complete faith in them.

If someone tells you something – investigate it thoroughly. I also learned that in Yeshiva. If it doesn’t make sense – delve deeply, until you find truth.

I heard that many people believed that the nutritional value of spinach was great because of its high iron content. Then someone discovered, that the German scientist, who did the study of spinach – misplaced the decimal point – instead of 3.5 mg of Iron, he wrote 35.0 milligrams of Iron.

“A Diet for a Little Planet – What they don’t teach you in Harvard Medical School.” is a book that talks about nutrition. It includes a  story about a Harvard professor – that spoke frequently about the dangers of cholesterol. One student found some of his words to be a bit off. He investigated, and found that this professor was paid off by a Cholesterol Drug company, to preach the dangers of cholesterol. This was the company’s way to assure future Doctors would prescribe their medicine.

Unfortunately, this is the story of most people in the world. They follow friends, a religion, fad, fashion, a philosophy, a way of life – until they die or if they pray to G-d/ Hash-m to find truth and make the proper efforts, they find out the truth.

Most people do not make the effort to find truth. They would rather follow the easy path of lies than pursue the challenging path of searching for truth.

The problem is is that only in this world can a person correct themselves. In the world of truth – Heaven or the next world – you will find out the truth, but it will be to late to correct. This world is the world to work to do good. The next world is to receive the reward for ones deeds.

Better to know the true path here than only once one gets above.

The Jews had to leave Egypt very quickly. If they had not left so speedily, they would have sunk to the 50th level of impurity. And then they would have never been able to get out of it.

Today – with sincerity, a yearning to find and a serious effort to search for truth, the Torah as a guide, wanting to do the True Will of G-d, & belief in oneself – one can achieve the true will of G-d.

Thus you’ll be one step closer. But always use rationality and logic as a guide. The Torah doesn’t want a person to follow like sheep. G-d wants you to think, question, ask, challenge to find truth.

You just have to be willing to lose friends, popularity, your old habits, to find it.

Many people are lost. The first step to break out of their self imposed shell of life is to be dedicated to truth – regardless of the price it takes.

When you are true to yourself & true to G-d – then one finds meaning and happiness.

G-d gives us freedom of choice to choose – if we will lead a meaningful and great life or a life of the shallow pursuit of pettiness and hatred.

The desire to find truth is the starting point to get out of one’s self-imposed shell.