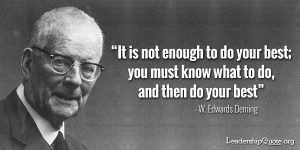 In the quality revolution companies adopted new programs to improve the quality of world manufacturing and service industries. One such a program is called Continuous Improvement.

Continuous Improvement is a Torah Concept.

In Torah, Either you are growing or falling. Staying the status quo is equivalent to stagnation.

Keeping to your ideas because you inherited them from your parents is stagnation.

Following the trends is stagnation.

But this is lack of using a precious recource called the brain.

Conforming is a bit of death to one’s individuality. I let go of what I am to be accepted.

Living a life void of Torah is a religion.

It is the religion of conformity. What I feel is good is good, even though it is not particularly good.

Once Eliezer – the Servant of Avraham Avinu / Abraham our forefather went to Sodom. He brought a man to the Court of Law because – he threw a rock at him. The Judge ordered Eliezer to pay the man who wounded him. He said to Eliezer – “You owe this man money. He performed beneficial bloodletting for you.” Eliezer, appalled at the justice, took a rock and threw it at the judge. He told the Judge “Now you owe me money for bloodletting! Pay the man that you said I owe money.”

The destruction of the People of Sodom was sealed for what they did to a young girl who gave food to a poor person. Doing kindness to strangers was forbidden. They took her – smeared her with honey and hung her up until bees stung her to death. Her cries to G-d caused Sodom’s fate to be sealed.”

Following truth is not religion. It is using one’s mind to do the true.

A Jew’s obligation in Torah is to follow Shulchan Aruch – the Jewish Code of Law. A Gentile is to follow their 7 Noahide Laws from the Torah. This is the beginning of freedom.

This is the meaning of Pirkei Avot :

“The only free person is the one who delves into Torah.”

Why? because most people follow their desires. The Torah teaches us how to overcome our base wants to become a more noble individual. This is true freedom.