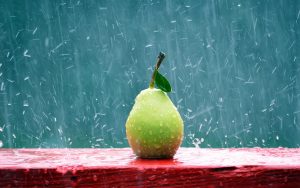 The rain serves another purpose. Cleanliness is close to G-d-liness. (see Mesilat Yesharim). G-d wants a clean world. The world is washed through rain.

For thousands of years, the Jews yearned for a time where peace will reign in the world. When we and all people can serve G-d without burdens or bother.

This is called the period of the Messiah. The Messiah will be a great person who will bring peace to the world.

We are very close to Messiah. One of the goals of Messiah is to cleanse the world from Evil. Those elements that act contrary to G-d’s laws. Those that don’t believe. Those that care not about spirituality or truth.

But those people are not doomed. Repentance is always possible for these people. If they didn’t believe in the G-d of Israel, they can start believing. If they had a hatred for Jews, they can change their attitude. If they committed sins in the past according to the Torah, they can separate from these sins, commit not to do them more and ask for forgiveness.

G-d is very forgiving. In the great flood at the time of Noah, G-d waited for the last moment, hoping people would repent. If they did, G-d would have cancelled the flood. Unfortunately, people didn’t repent. If a person repents sincerely, to do the will of G-d as explained in the Torah, a person can be more likely saved from calamity. A Jew follows the Shulchan Aruch – code of Jewish Laws. A Gentile follow the 7 Noahide laws – as explained in the Torah.

The Torah offers two paths. One for Jews and one for non-Jews / Gentiles. Jews follow the 613 commandments. Gentiles Follow the 7 Noahide commandments. It is possible to come to the conclusion that the Torah is G-d’s law. How? In History, the Torah was the only Divine law given before millions of people. All other laws, were transmitted by one man. The Torah was transmitted by G-d Himself, witnessed by millions of people.

God is Good – His Laws Are Just & Kind

G-d’s laws from the Torah are for the good of man. Unfortunately, many do not understand that.

Let’s take the law in the Torah that prohibits Homosexuality for Jews or Gentiles.

Who is kinder? The US Supreme Court – that permitted same-gender marriages or G-d that forbids it?

Giving a person what they want is not necessarily kind. Is giving a person cigarettes, or an alcoholic whiskey, or a druggie drugs – being kind? No.

So how are we to understand how G-d is infinitely kind? Or that the Laws of the Supreme Court are actually tremendously cruel?

I met many people who are support same gender marriage. If someone were to say – let’s do away with these people – they would be considered cruel. And to suggest terminating their descendants is also very cruel.

In reality the Supreme court has achieved this goal of destroying the future generations of all people who participate in same-gender marriages. If same-gender marriage was outlawed, many people among them, would have reverted to a traditional marriage – between male & female. They could have descendants that could bring much good to the world. The Supreme Court’s ruling – terminated generations of good people with one stroke of the pen.

Some will say – ok, but these people can adopt. Answer: They will never have children that have their genes. Their children will never be raised by their biological parents. Their descendants will not be a unique individual from the mutual genes of the partners. The Supreme court has “robbed” the world of the descendants of these people.

The Prophet Who Condemned the King

Hezkiahu was a king of Israel. The prophet Isaiah came up to him to tell him a message from Hash-m / G-d. He said the King “will die and not live.” The question is posed – why the double language. Obviously if one will die, they will not live. The Torah answers – that King Hizkiyahu was to die in this world and not live in heaven. Hizkiyau was a righteous king. What was his transgression that warranted this punishment?

He refused to have children. With an understandable reason – he saw through Ru-ah’ HaKodesh / A Holy Vision – a manner of seeing the future – that his descendant would be Evil in G-d’s eyes.

The Prophet Isaiah told him – this is not your concern. You must do the will of G-d as it says in the Torah. One of the Commandments of the Torah is to Be Fruitful & Multiply – for Jews & Gentiles. Regardless of the character of your descendant – whether you had a vision that he would be evil or righteous – you must fulfill the commandment of the Torah. King Hizkiyahu agreed. He Decided to marry the daughter of the Prophet Isaiah in hopes that the merit of the righteous father, mother & grandfather – the resulting child would be righteous.

Hizkiyahu’s descendant – the Child that they had – was evil. He served idols. He Killed and committed other transgressions to anger G-d. One day he was being pursued by his enemies and he called out to all his false gods. He received no answer. The enemies were still in hot pursuit. Then He called out as a challenge to the G-d of Israel – “G-d of Israel – if you really exist and you save me – I will repent.” G-d did save him and He did repent.

Nibiru or Planet X is approaching. Many people have taken pictures of it. It is possible it is the star that passed by the earth about 3,600 years ago that caused the great flood of Noah. It is possible that this is the Star that the Gentile Prophet Bilaam Talked about in his prophesy in the Torah – Darach CoChav MiYaakov – A Star from Jacob will trample … (Bamidbar /. Numbers 24: 17 -18). Some explain that this star will cause mass havoc. That It will cause inhabited places to become uninhabitable. The Chance of Survival – apparently is one in three. I believe that that is the statistic that is quoted in the Torah about the survivors.

So Aligning oneself with Torah Values – whether one is Jewish or Gentile – is the best spiritual preparation for surviving Nibiru. (Ie, accepting the Torah as one’s guide – by accepting to eventually do the 7 Noahide laws – for Gentiles or Accepting to follow the 613 Commandments from the Torah – as written in the Shulchan Aruch / Code of Jewish Law by R. Yosef Karo.) Just as it was for in the time of the Flood. Unfortunately, then many people didn’t believe or didn’t repent. Hopefully, this time around many more people will survive.