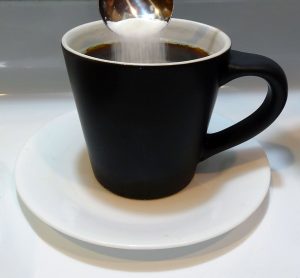 I was pouring sugar into a spoon to put into my Coffee. The container suddenly let out a spurt of sugar over my spoon. Apparently – it was equal or less to the amount of sugar I usually put into my coffee. I thought – “why did that happen?”

Nothing is chance. I figured either G-d wanted to give me the amount of sugar I needed without me having to make the effort of measuring it out – or He wanted me to limit my sugar intake by allowing less than I usually take to fall into the coffee – yet, an amount that I would be satisfied with. I figured it was something that a parent would do.

Hash-m is everywhere. In Hebrew G-d is called “HaMakom” – “the Place” because He is every place. It is not that G-d is in the world – the world is in G-d. G-d is infinite – the universe is finite.

Hash-m Helps based upon Belief

Hash-m helps all people. Yet he helps people based upon how much one believes in Him. One who has strong belief in Hash-m He will help more than one who doesn’t believe as much.

My aunt – once needed to go to visit her parents. She has much emuna. She needed to pay for the plane ticket and travel expenses. She bought a lottery ticket and prayed very sincerely to Hash-m to help her make the money she needed.

She won over $2000 dollars that week – enough money to buy tickets and to pay for traveling expenses.