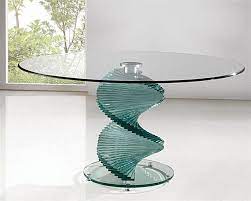 They just installed the glass cover on our table top. Looks nice. I see them install it. Coming home later that day, I see a big crack in the glass. What? The first day we get it?

All is for the Good

Gam zu leTova. Also this is for the good. Perhaps it was a Kapara – an atonement for a deed. This is the lesser bad of two options of atonement.

Some will say it is Ayin HaRa / the Evil Eye. If someone sees something and they admire or desire it – they might cause an eventual damage to that object. How? We explained it before – G-d listens to the prayers of people. He also hears the heart of people. If someone wants something that you have – Hash-m pulls out the books of deeds of both people – He judges between them and if the one that lacks the object is more worthy or the one that has the object is unworthy – something happens to the object. Was it Ayin HaRa? Perhaps.

I find out someone – it doesn’t matter who – happened to put a very hot pot onto the glass. The tension caused by the heat in the glass caused it to break.

The Physics – A Free Physics Lesson

A Lesson For Us – Don’t Get Heated Up

Rehearse Reaction to Situations that Anger

How? Rehearse in your mind how to react to particular things that anger you. And how to react in general. Count to 10 before you react. Take a glass of water before reacting. Act don’t react. Control Yourself – don’t let anger control you.