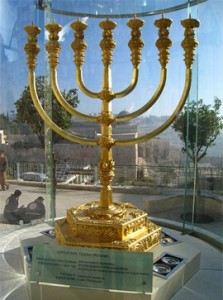 Each branch represents one area of knowledge:

When one uses their knowledge and faculties with the guidance of Torah – they arrive at true illumination of the mind and soul.

2. Rabbi Yehoshua son of Levi said: “Every single day a heavenly voice comes out from Mount Horeb [Sinai], & proclaims & says: “Woe to the Mankind for the disgrace to the Torah!” [that they neglect learning & practicing it], for whoever does not occupy himself with Torah is called “reproached” [nazuf] as it says: “A ring [nezem] of gold [zahav] in the nose [af] of a swine is a beautiful woman that turned away from reason.” (Mishle 11:22) & it says: “And the tablets [of the Law – the ten commandments], they are the work of G·d – & the writing is the writing of G·d – engraved [h’arut] on the tablets” (Shemot 32:16) Do not read [it as] “h’arut” [engraved] rather as “h’erut” [freedom]. For the only one who is considered to be a free person is one who engages in Torah Study. And whoever engages in Torah Study, behold they are elevated as it says: “And from Matanah [name of place meaning – a gift – ie, of the Torah] to Nachliel [name of place meaning – My inheritance is in G·d] & Nachliel to Bamot [name of place meaning – high altars].” (Bamidbar 21:19)

Types of Freedom
Torah freedom is not necessarily what society considers freedom. Freedom of society that leads to addiction or personal loss is not freedom. It may be considered freedom or can be addiction or debauchery. The first step is to define what is freedom:

Society’s definition of freedom is – to do what you want, when you want without infringing on the rights of others.

The Torah’s definition of freedom is – to be in control of yourself that you do not harm yourself, others or the world.

When a person’s central focus is Torah – then they can be freed from the limits and constraints that society urges upon them. Many addictions exist. A cell phone, TV (average usage is 5 hours a day), Drugs, Smoking, Alcohol, Food. Yet in the proper context – they can be used properly.

Personal Freedom
A person once asked “Are our tools our servants or are we the servants of our tools?” Today that is a very relevant question. People are addicted to tools – cell phones, email, TV, drugs, alcohol, etc. Hash-m gave the Jews the gift of the Shabbat – 6 days we work – and on the 7th day we rest from all creative work. Instead of being a servant to long shopping lines, carrying heavy shopping bags, being attached to the cell phone – we spend our time with family, enjoying our family and appreciating interaction with them. We put aside our tools and thus show we are their master by our observance of Shabbat.

Emotional Freedom
Mussar is basically translated as ethics. It is much more. It encompasses – self-control, self-improvement, emotional control, emotional maturity. Basically one uses their mind over their emotions. When the mind is in control one is not a servant to their emotions. One controls anger. Anger does not control them. One’s mind guides the heart. One’s heart does not guide his mind. It is a higher level of freedom.

Psychological Freedom
The Rambam / Maimonides states that “One who thinks of improper sensual thoughts is gets a greater punishment that one who actually does them.” This is difficult to understand. Some explain – because thoughts are more recurrent – thus one is punished more. A Gentile – who thinks of seriously doing a bad thing is punished as if he or she did that bad thing. A Jew that thinks of doing a good thing is given a reward as if he did the good thing.

One might think – wow – that is unfair. Why should I be punished for thinking badly? The answer is simple. If one thinks not badly, they will likely not do bad things. One steals – because they think of stealing. One hurts others, because it is a possibility or thought in their mind. Thus, eliminate the bad thoughts and eliminate the bad actions. Curtail the thought, curtail the action.

Moreover, a person who refrains from negative thoughts – replaces them with positive thoughts. Instead of having a miserable, negative view of the world – full of jealousy, anger, hatred, and vengeance – one turns their life into a life of peace, love and understanding.

Freedom of Expression
Torah Study – like Talmud study – is the most open-minded discussion one can have. One expresses their thoughts with a partner – chevruta – and together people arrive at Torah truth together. The goal is not to be right – the goal is to arrive at truth. There are no restaints – like the restraints placed upon by society – like political correctness (in the negative sense), society imposed morality. One’s only goal is to arrive at the truth. One breaks barriers of assumptions, “accepted values” and gets to what is true and good in G-d’s eyes.

A person who follows fad and fashion – are not necessarily expressing themselves – wearing the latest styles or street garb. They express the thoughts of the fashion designer. Externally they send a message – but inside they remain the same old people.

True freedom of expression is perfection of the individual. This is an internal improvement – A true expression of themselves. Thus those that do learn Mussar / ethics and Jewish self-improvement works – and work on becoming a better individual. This emanates from their inner being to the outside world – there is no greater self-expression than this. Their acts of kindness show kindness. Their acts of benevolence express benevolence. Their good acts express their goodness.

In the scientific world – many people don’t know how the universe originated. So they propose theories that the world was always in existence. This was debunked by the big bang theory. But what is the primary cause of the functioning of the world? Some say the world came about by randomness. But a general rule is that order does not come from randomness. If a world was made through random interactions of molecules – then it would be highly unlikely that even a cell would be created – let alone, trees, birds, animals, plants, fish and humans. Also where did these initial molecules come from. Some scientists – even a very intelligent scientist – says that aliens started the world. Yes, so who maintains the world and who created these aliens.

The Torah offers a simple answer – G-d created and maintains the world every single second. Some might ask – so who created G-d? The simple answer that many humans cannot comprehend is G-d always was. He created the concept of time. Since we cannot easily understand a world without time – it is a challenge to fathom.

Accepting the logical over the illogical. The Torah frees a person to think logically. It is more logical to think that an intelligent existence – G-d – created a thought out and orderly world than to think everything came about through randomness.

In Torah, a person has the right to do what he wants as long as he does not harm himself or others. Take the example of same-gender marriage. The society thinks that giving right to same-gender marriage is emancipation. In reality it is devolution. Many people who hold for supporting same gender marriage do so at the detriment of those who practice it. One of the worst insults a person can give to another is that they should die. Dying can various ways. It can occur through lack of expression or lack of continuity of a person through children.

The Torah says three are considered dead “One who has no money, one who has no children and one who cannot see.” One who has no money – cannot fully experience the pleasures of life. One who cannot see also does not experience sight which makes life dark. One who has no children – has no continuity. The person could have added beautiful people to the society that have a unique mixture of their parent’s personalities. Now through choosing – not to bear children or engaging in a marriage which will never bear natural children – they are withholding these unique individuals to the world. That is a detriment to society. G-d wants a populated world. Not an empty one. G-d wants a varied world. Same gender marriage – restricts the number and quality of people from coming into the world.

The Torah would rather have the continuity of these people – have their children in the world by them participating in a traditional marriage between a man and a woman. Same gender marriage, unfortunately, condemns the prospective natural descendants of these people to non-existent.

Torah – the Only Divine Law Given by G-d Heard by Millions
The Torah, given to the Jewish people, at mount Sinai – has laws for all people. Laws for Jews and for Non-Jews. Judaism is not a religion. It is life the way that G-d proscribed. Two major differences between Judaism and other “religions” is other religions – had one founder that said they had a prophetic vision. He taught his way of life to his adherents.

Omniscient, G-d changes not his “mind.” The laws he gave about 3,000 years ago are the same as those observed today by Torah Jews. (ie, “Orthodox” Jews – I prefer not to use denomination of Judaism terms for two reasons – they just at times serve to separate people and when G-d gave the Torah there were not these denominations – they are man made terminology. I use them occasionally to make things clear. Either person is Jewish – because his mother is/was Jewish or they converted, guided by an “Orthodox” Rabbi, through an “Orthodox” Beit Din – or is a Gentile.)

A person who puts G-d into the picture – realizes that if G-d is here, we must behave properly. If one ignores G-d, they think they are free from the morals of G-d. But in any case – whether one ignores or believes in G-d, one will be Judged – in the next world. So in any case – like the sign in the dentist says “Ignore your teeth and they will go away.” Meaning if one ignores his teeth the problems will not be resolved. If one ignores the law – it doesn’t mean that the person will not be judged.

But more than that. A person who does learn and follow their respective laws – end up achieving this precious state of being called freedom. True freedom.