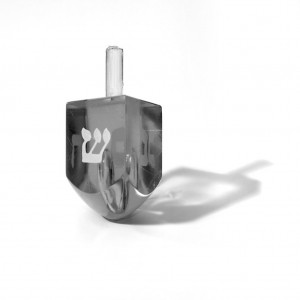 Life is a bit like the game of Dreidel.

Time spins, landing you in a certain situation. Now you decide what to do.

Although, some of our paths are traced for us, we do have an influence on that path that we take.

We have freedom of choice.

Freedom to do good or bad.

Freedom to be nice or mean.

Now it is up to us to use our strengths and mind to reach the potential and purpose we were put on earth for.

Our country, Society and families have certain expectations of us.

Some good. Some not so good.

Once one is engulfed in these expectations, it is takes thought and effort to break free.

When G-d spoke to Abraham, he said “Go, for yourself, from your land, from your place of birth and from your fathers house, to the land that I will show you.”

He was telling Abraham, in order to grow, you have to get away from these influences to grow and become great.

Our surroundings have a great influence upon us.

Breaking Out of the Mold – the Pursuit of Truth

When one is outside of their normal surroundings, they can see life in a new light and grow without limiting their growth to the expectations of others.

When I was young I never wore a Kippah regularly outside. When I moved away from my land, my birthplace and my family to Switzerland, I contemplated life. It helped me to recognize the importance of maintaining a close relationship with G-d. I recognized the importance of wearing a Kippah to signify that there is a G-d above me. Apparently, had I remained in the US, it would have taken me more time to arrive at that point.

Moving to a far off land is one option. But not always practical or effective.

How can a person, who for generations their families were pursuing a certain way of life, like idolatry, break free?

How can a person reach their true selves?

It starts with sincerely pursuing truth.

There was once a person who used to steal. He went to a rabbi. He asked the rabbi, what could he do to kick his desire to steal. The rabbi told him – always tell the truth. The man tried it. Though it was difficult to him, he realized that this was the way for him to get out of the shackles of his stealing binges.

Pursuing truth means questioning our society, our values, our selves to see if our path is a true path.

My Pursuit of Truth

Some of the questions I asked in pursuing Truth and Ethical Behavior:

Am I fulfilling my potential or avoiding facing my responsibilities?

Is my way of life true?

How do I know Judaism is the true religion to serve G-d?

Why do we worship G-d – because of logic, feelings or national revelation at Sinai?

Is it proper to take the last loaf of bread in the store, if you have enough stored in your pantry for a several days?

Is it proper to spend so much time tanning or watching TV, when there are so many other productive things I could do?

Is it proper to use a TV as a babysitter for young children, given the impropriety displayed?

Is television a proper medium to expose my family to give them proper values?

Is it ethical to buy an item at a store, use it for a couple days, then buy the identical item at a cheaper store several days later and return it to the first store?

Can you prove that G-d exists through logic? How?

Can G-d create a Stone that He cannot destroy?

Converts to Judaism, are great, because they truthfully questioned their way of life until they arrived at Judaism.

When one does pursue truth – though initially more challenging than following the flow – one lives a happier life. One also lives a more meaningful life, because every act becomes purposeful. Like the Mitzvot. We have Mitzvot / commandments for all aspects of life. Thus, each act we do, takes the proportion of the divine. Each act, however mundane, becomes purposeful for G-d has ordained it. Like eating kosher, one lifts a mundane activity, to become an act ordained by G-d.

Some people base their lives on doing what feels good. Something could feel good but not be true. This is the case for idolatry. There was a period in time in which people had an innate desire to worship false gods. It might have felt good, but it wasn’t the true path. If a person worships a cartoon character, because it feels good, does that make it right? No.

My Rebbe, Rabbi Zecharia Mines, z”l said: “The heart is to be controlled by the mind, Not the other way around.” Many people who are lost, seem to ignore this principle. They follow in a way till the end of their lives and end up with a question on their deathbed.

I heard a story on an *audio about the death of a certain cardinal who was friendly with a rabbi. On his deathbed – he was visited by the rabbi. He asked the rabbi, according to his bible certain events were supposed to take place before the Jews returned to Israel. They did not. The prophesies that were foretold were false. He asked the rabbi “Since the prophesies in his bible were proven false by recent events, does that mean that he wasted his life in dedicating it to a religion whose prophesies were not the truth?” The rabbi, at this moment of truth, had to give him a true answer. The rabbi said “Yes.” The cardinal died in much pain knowing this fact.

The Torah is the only Law that was Given by G-d to a nation of millions of people in the history of the world. No other religion besides Judaism claims this. G-d, who is omniscient – all knowing of past, present and future, does not change his mind. Thus the Torah remains his law.

Those following Judaism – either Jews who follow the Torah or Gentiles that follow the 7 Noahide laws from the Torah are very small in number.

Apparently it is easier to avoid questioning and follow the trodden path than to pursue truth. But those who do, gain immensely. They end up approaching their purpose and potential in life.

Those who don’t question during their lives, sometimes end up with a question at the end of their lives.

Those who do question, and act on the answers to improve themselves, Instead of ending life off with a question – “did they accomplish their purpose in life?” – they end off with satisfaction that they tried their best to achieve it.

* A gentile, is not required to convert to Judaism to receive a place in Heaven, they just must follow the 7 Noahide laws / Sheva Mitzvot Benei Noach and their details because of the Torah.

**I beleive the audio was by Rabbi Akiva Tatz at Simpletoremember.com. A good place to start in the pursuit of truth is to listen to audios at the above site and those mentioned in the links section here.