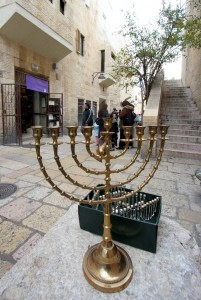 When I was younger, I wanted to meet everybody in the world.

I reckoned, that each person is different. Each person is unique in the world. Each one has their own personality.

The Torah (Mishna in Sanhedrin 4:5) states that one reason G-d created all mankind from a single set of parents is to indicate G-d’s greatness, “for a person mints many coins from the same mold and they all resemble one another. But the King of kings, the Holy One blessed be He, forms each person in the image of Adam and not one of them resembles his fellow. Therefore, each and every person must say, ‘For me was the world created.'”

Thus, I had a will to meet every person.

But I guess you can meet many people. Some people you don’t want to know or want to avoid.

Once in New Jersey I was a vendor in a street fair for a store. I forgot about the people I met.

Recently, I had the opportunity to be “a street vendor” vending Jewish items.

You meet all kinds of people.

– The Woman from France whose relatives died in the holocaust, who was questioning the existence of G-d.

– The Man who loves to tell Jewish Jokes.

– The African American waitress, struggling with the challenges of life, who is sincerely interested in Judaism and is learning more about the 7 Noahide laws of the Torah for all people.

– The woman whose father is Jewish, interested in converting to Judaism but ambivalent in taking on the responsibility.

– The man, a Judo expert interested in learning Torah.

– The African American man, whose mother is Jewish and wants his sister to learn more about Judaism.

– The religious Jewish paper delivery man searching to get married.

– The Moroccan man that gets emotional about the news events.

– The Old lady, a holocaust survivor, who shared “For many years I felt like an empty shell of a person until you gave me these Jewish materials. Now I feel life again.”

All are precious in G-d’s eyes.

Because we struggle it doesn’t mean that it is bad. When a person does sports the pain helps him to perfect himself in the sport. The struggles of life help us to perfect ourselves and become better. The struggles are here to help us shape ourselves – using our mind and the Torah outlook to become the best human being we can be.

G-d sends you a struggle, is with you in the struggle, helps you overcome it and rewards your efforts in overcoming them.