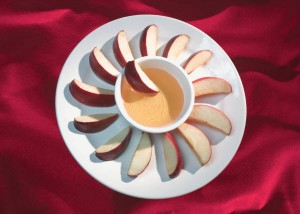 Dip the Apple in the Honey.

Have a Good and Sweet Year.

Thus goes the children’s song. (Sung to the tune of “Clementine”)

The Path to spirituality in Judaism is to take the mundane and to transform it into the holy.

To take the physical and uplift it to the spiritual realm.

On the two nights of Rosh Hashanah we conduct a short Seder / Order of eating foods whose names are symbolic or sound like a good sign for the new year. This is accompanied by a short prayer for a good outcome related to the food’s symbolic sign said before eating it.

The Apple dipped in Honey – which is sweet and delicious – is one of foods we eat is a physical sign to express hope for a sweet year materially and spiritually.

Moroccans eat Pomegranate Seeds, each representing a Mitzvah, for the hope we will take part in many Mitzvot / Commandments in the New Year. There are some 613 seeds in each pomegranate – equal to the number of commandments for the Jewish people – 613. Thus the statement – Even the unlearned Jew is full of Mitzvot like a Pomegranate.

A child’s early childhood upbringing will have an effect on their adulthood. The start of the project has influence on the projects future.

On Rosh Hashanah we eat sweets for a sweet year. We eat a sweet apple with honey and say an introductory prayer related to the food for the rest of the year. We avoid anger to avoid quarrels. We avoid excessive sleep to have a lucrative year.

Although believing in omens is forbidden in Judaism, many rabbis discuss why using these omens are permitted in the beginning of the year. According to the Tur’s opinion these are all good omens so there’s no concern of divination. The Meiri writes these utterances have an effect on inspiring one’s repentance and good deeds.

Repentance is an important part of Rosh Hashana to assure that we are inscribed in the book of life. Transgression blocks our being our true self. For really we are the soul and our soul only wants to do good. When we repent for our misdeeds we become closer to G-d and closer to our true self. When G-d sees we want to improve, we change ourselves into a new, different and better person, and G-d gives us a new year full of bounty and blessing.

The Magen Avraham says that’s one may use foods whose name carries the implication of the blessings even if it is not a Hebrew name for the food. Pursuant to this opinion many communities have adopted the custom to eat carrots on Rosh HaShanah. Carrots and in Yiddish is Mehren which also means increase.

The Order of the Symbolic Foods of Rosh Hashanah

Customs for Order of the Symbolic Foods vary. One should follow their own custom. There is a text stated before eating each food. It can be found in Rosh Hashana Machzors / Prayer Books.

Other Optional Foods –
The Magen Avraham said you can add foods that have a positive symbol or have words that resemble good tidings even in languages other than Hebrew. Here is a list that we compiled

Raisin & Celery – “Raise in Salary”
Bread, Chocolate Coins or Dough – to make money
Cashew – “Cash – You”
Mango – to get rid of annoying neighbor
Spelt – to improve your spelling
Roll – if you are a comedian
Peas – for Peace
Liver – to live
Brain – To be smart
Herring – to improve your hearing
Leek – if you are a plumber
Meat & Honey – If you wish to get married – “Meet Honey.”
Ketchup – if you are a runner
Steak in Apple – To Gain Shares in Apple Computer

Remember to accompany them with the proper introductory prayer i.e, “May it be Your will G-d and G-d of our fathers that you improve my hearing.” and eat the herring.

Starting the Year with Happiness

One tries to avoid eating bitter or sour foods on Rosh Hashana to assure a sweet year.

One should avoid anger on Rosh Hashana for the reasons mentioned. One’s Mood should be that of happy confidence. Happy to look forward to a positive new year. And confident that one will be inscribed in the book of life. A rabbi once told me that after one feels badly for their transgression, they should feel happy in order to not fall into depression because of their sins. We should be happy that we have a forgiving Father in Heaven that cares about each and every one of our lives.

Thus below is humor for the new year.

Here is a list we compiled of foods that one should avoid eating in excess on Rosh Hashana. (This section is humor and these foods need not be avoided)
Tongue – if you are talkative
Turnover – to avoid your employees from quitting
Date with a nut – if you are looking to get married
Ice Cream – “to avoid anger”
Popcycle – if you are a bicyclist to avoid flats
Kix, Smacks, Hits
Hotdog – “if you don’t want your dog to have a fever.”
Chicken – if you are afraid
Wine – if you have children
Crab Apple – to avoid being crabby
Pickle or Jam – “To avoid being in a pickle or a Jam”

So Now You have a Shopping List. Don’t Forget the Cake, candies and other sweets for the kids and the family.

May you and your family have a Healthy, Happy and Meaningful New Year.