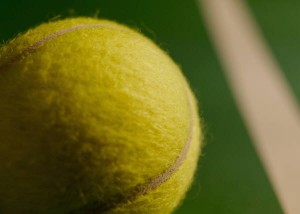 A friend asks you to go to a tennis match. He knows the players personally. You are an avid fan and have many questions to ask about the sport.

Before the two professional players play – they have a pregame show.

It is a fund-raiser for kids against drunk driving. Teens run onto the court, positioning themselves for a game of doubles. One throws up what appears to be a ball and serves it to his own team-mate. It turns out to be a water balloon. It splashes all over him.

The team-mate takes his tennis racquet to serve and throws it up instead of the ball. A dog comes out from the bleachers, grabs the ball, and throws the ball over the net.

The other team, not to be outdone hits the ball the dog threw into the crowd. They then are up to serve. They serve a ball over the net. Hitting the ground, it splits in two pieces… The show continues. The crowd roars with laughter.

Now it is the professionals turn to play their match. Each one is precise in their movements. They serve the ball at speeds rivaling the speed limit. Each displays a wonderful display of determination and skillful mastery of the game.

After the exciting match, you go down to the court with your friend to meet the people of the show and the professional players.

Who do you ask your questions about tennis?

The players or the teens in the show?

Now, one is interested in Judaism or Torah. One wants to bring spirituality into their lives. So who should they ask to find out more?

The ones that are following the rules in the Torah.

Jews observe the laws of the Torah stringently. In the Torah it says – don’t eat pork. Jews don’t eat pork. It says don’t cook milk and meat together. Jews don’t eat milk and meat together. It says observe the three pilgrimage holidays – Passover, Shavuot and Succot – the Jews observe Passover, Shavuot and Succot. The Torah says don’t follow after G-ds of wood or stone or make an image of G-d from anything in heaven (ie, spiritual or astral) or on earth (ie, physical) – the Jews don’t make representations of G-d.

1 thought on “Tennis Anyone? Judaism’s Explanation of Torah”