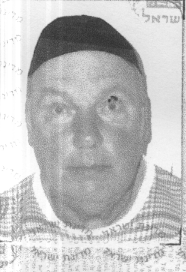 Charlie was a sincere convert to Judaism. He was a person of truth. He lived in Israel because he said that is our home. I had the privilege of knowing him when he was in the US.

It says in the Torah in several places our obligation to love the convert. I understand why.

It is a challenge to leave that which you grew up with and join a new nation, and a new set of values. Thus we are commanded to make the transition easier.

Many a time, a convert is a pioneer and a searcher of truth. What others accept as status quo, they question. They want answers and to find truth in their life. This is one thing I appreciated about Charlie. He wasn’t afraid to question values or society to arrive at truth. He once said he tried pleasures of the world but that he found no happiness there. He didn’t just experience life – but evaluated it to make sure it was proper, it was bringing him satisfaction and it was true.

It is not common that you find someone so sincere in the pursuit of truth and justice like Yeshayahu ben Avraham. When he learned that something was true, he was not satisfied as leaving it as an interesting concept to reflect upon, he took action to implement it into his life. He used go to the rabbi’s house, sometimes late at night, to discuss issues that were concerning him and to find out what the Torah says about it. He patiently asked questions until he was satisfied with the answers. He was willing to change, even if it was at times a challenge for him, if he felt it was the truth. There were times where the rabbi did suggest things that he could improve. He took it to heart and put the words into action.

He was a man that did what he could to improve the welfare of his fellow man. If there was a cause that he felt needed improvement, he tried to take action to correct the situation.

Charlie lived by the the Torah’s Philosophy of “what is hateful to you you should not do to others.”

Charles Coburn, also known as Charlie – was converted by a Beit Din Tzedek / a righteous Jewish Court of law. He was adamant at doing things right. Since he had a question about his first conversion, he made another one to assure that it was done according to Halacha / Jewish law.

In July of 2010 Charlie was riding his bicycle in West Springfield, Massachusetts when he experienced heart pains. The police brought him to the hospital, where he was pronounced dead. The authorities there buried him in a public cemetery. Some individuals from the Jewish community arranged a disinterment to have him buried in a Jewish cemetery.

Charlie had great love for the land of Yisrael and a strong desire to live in Eretz Yisrael. He loved his fellow Jews and was a strong Advocate for the release of Jonathan Pollard and Gilad Shalit. He was an activist against parking in wheelchair ramps, idling engines, talking in shul / synagogue and making noise late at night when people are sleeping. He helped people in need and readily helped to complete minyanim (10 men for the prayer service).

Yeshayahu ben Avraham, z”l a Ger Tzedek – a sincere convert to Judaism – was niftar / died the 15 av 5770, He lived in Israel, Connecticut, Massachusets and New York. Before he retired, he was a bus driver. Apparantly because he loved to help people.