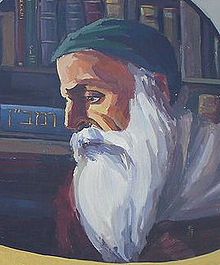 In 1263 Rabbi Moshe ben Nahman – Nahmanides – was summoned by the King of Spain – King James I of Aragon. The King wanted to find out what was the true religion. At that time the church had much power in Spain. A Jew – who “converted” out of Judaism* instigated this dispute.

The king summoned the parties to his palace in Barcelona.

The Disputation of Barcelona was regarding:

To the Second – Nahmanides brought proofs from the Talmud that the Messiah is a human being and not divine.

Nahmonides said that if a person heard what the Church claimed for the first time, they would have dismissed it. Specifically he said:

“[… it seems most strange that… ] the Creator of Heaven and Earth resorted to the womb of a certain Jewish lady, grew there for nine months and was born as an infant, and afterwards grew up and was betrayed into the hands of his enemies who sentenced him to death and executed him, and that afterwards… he came to life and returned to his original place. The mind of a Jew, or any other person, simply cannot tolerate these assertions. If you have listened all your life to the priests who have filled your brain and the marrow of your bones with this doctrine, and it has settled into you because of that accustomed habit. [I would argue that if you were hearing these ideas for the first time, now, as a grown adult], you would never have accepted them.”

Friar Paul claimed: “Behold the passage in Isaiah, chapter 53, tells of the death of the messiah and how he was to fall into the hands of his enemies and how he was placed alongside the wicked, as happened to the Church’s messiah. Do you believe that this section speaks of the messiah?” (This chapter is quoted many times erroneously by missionaries to ensnare followers not knowledgeable in Bible verses.)

Nahmanides said to him: “In terms of the true meaning of the section (that refers to a suffering servant), it speaks only of the people of Israel, which the prophets regularly call ‘Israel My servant’ or ‘Jacob My servant.'”

Nahmonides could have also mentioned – “Given this verse and all other verses do not refer to their messiah – it seems strange that according to the Church the Bible’s supposed main character is never mentioned once by name.”

To the Third, he may have replied – The Jewish faith is the only faith that G-d himself spoke directly to a nation of millions of people. At Mount Sinai, millions of people witnessed and heard directly from G-d, the law that G-d gave – the Torah. No other faith claims this. All other faiths were started by one individual. What is more credible – millions of witnesses or one witness?

The basis of Judaism is the word of G-d. The basis of the other faith is that a man came and said G-d changed his mind – and new laws are now instead of the laws that G-d gave. Apparently, this is also illogical. G-d knowing all the past present and future, will not change his laws. If G-d Himself states laws and a man challenges this and says G-d’s laws are not applicable, who do you listen to?

The argument above is a bit like a parent asking a child “why did you take a cookie from the cookie jar when I said you cannot take cookies before dinner?” The child replies “but my brother said I could have one?!” The parent replies – “If I your parent says something – and your brother says something else, who do you listen to?”

At the end of the disputation, King James awarded Nahmanides a prize of 300 gold coins and declared that never before had he heard “an unjust cause so nobly defended.”

Although the King admitted to the force of Nahmanides argument, the answer of the king showed he was not willing to accept truth. If he did he would have instituted the 7 Noahide laws – from the Torah – in his land. He also would not have exiled Nahmanides from Spain for speaking truth.

The way of Judaism is to delve and delve until the truth is found. When it is found one acts upon it. Sweeping truth under the rug is not an option for the honest person. Acting on truth is the honest person’s path.

*(A Jew cannot convert out of Judaism – a Jew that does go through the motions of converting will be judged in heaven as a Jew regarding whether they fulfilled the precepts of the Torah for Jewish people.)

The Text of the dispute can be found here