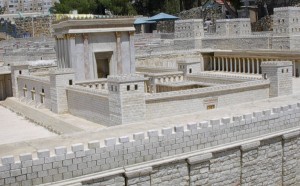 One day there will be no more war.

Like it says “A Nation will not lift their sword against another nation. They will no longer learn war.” (Micha 4:3)

Sometimes people get into an argument but they really agree about what they are discussing. They are just expressing the same thing in different ways.

What is the basis of the argument?

Their underlying values. One values efficiency. The other values quality.

If there is one set of values there is less dissension and more peace.

The Messiah will teach the world that proper set of values is that of the Torah.

Torah was the only law given by G-d to a nation of millions of people – that was witnessed by millions of people. G-d does not change His mind. So G-d’s Laws for the world remain the same as when He gave them.

Once we can agree one law for all people, peace will be more readily attainable.

So, it is important to clarify the points of dissension.

Why are some people against Israel?

Because they question the right’s of the Jews to Israel?

The Truth is – G-d gave the land of Israel to the Jews in the Torah. Rashi (commentator) on the first verse of the Torah (Bereshit / Genesis 1:1) says:

Rabbi Yitzhak says, the Torah should have started with “This Month is [sanctified] for you.” that is the first commandment of the Torah, commanded to the Children of Israel (to sanctify the Jewish Month). what is the reason that it [the Torah] started with creation? Because

“The Might of His (G-d’s) acts He told His people, to give them the inheritance of the Nations” (Tehillim / Psalms 111:6)

So that if the nations of the world claim to Israel “You are robbers for you took the land from the 7 nations” (that originally occupied Israel in the Time of Joshua), They (the Jews) can reply to them – all the Universe belongs to the Holy One Blessed Be He (G-d). He created it and gave it to whom was proper in His eyes. With His will He gave it to them, and with His will He took it away from them and gave it to us (the Jews). (Bereshit Rabba 1:2)

When the people of the world recognize this this is when there will be the possibility of world peace.

The Lesson of the Missiles

People are beginning to realize that G-d protects the Jewish Nation. G-d does miracles for His people. That is a prompt to investigate the veracity of the Torah. Miracles alone are not a proof to the veracity of something. (Many people can do black magic – yet their ways are not ways of truth.)

The next step is to translate it to action. Truth seekers will realize that the G-d of the Jews is in charge and that His Torah is the law He gave for world peace.

It is up to us to realize this and make the proper changes to reflect G-d’s sovereignty in our daily lives by Teshuva / Repentance, Good Deeds and upholding the Torah’s Mitzvot.

An important First step for anyone is Torah Study. Dedicating time daily to study Torah changes your life to realize what are true good values. It teaches how you can best contribute to the betterment of yourself, of your family and of the world.

It makes things much easier. Instead of relying on all sorts of peoples opinions for what is right or what is wrong – we ask someone well versed in Torah to tell you what G-d thinks. This is called Da’at Torah. G-d is the Creator of all values.

The world must go through a catharsis to try and see what is truth. Either they will come to truth from thinking it out. Or there may be a war – Known as the War of Gog UMagog – in which the Messiah will emerge triumphant and then people of the world will accept the truth of Torah.

With everyone holding by the same standard, peace is within grasp.

The Messiah will bring about the construction of the Beit Hamikdash in Jerusalem. This is the House that all people can come together to Worship and serve our G-d, the G-d of Abraham, Isaac and Jacob. This is when there will be ultimate peace in the world.

We want to live according to the laws of Torah in peace.

Not too much to ask for.