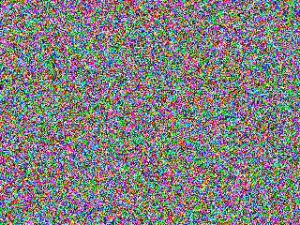 Some people are old enough to remember screen static on old TV screens. When you would turn to a channel that had no broadcast signal – random color dots appeared on the entire screen – accompanied by a loud sound of static noise. You would quickly change channels to avoid the experience.

Now imagine – you are watching static on the screen. All of a sudden a full length movie with sound appears. Everything makes sense – the plot, the story-line, the actors, the shots.

So your friend turns to you and says “Wow! did you see that? All the random static tuned into a full-featured 2 hour movie.” What do you say to him?

If a person thinks logically – he or she can come to the conclusion that G-d exists.

There are two possibilities – Either the World was created by a Super Intelligent Existence or It was formed through random atoms colliding.

Is it possible for something as complex as DNA to be formed by random?

Where did the atoms come from?

How is movement and growth possible – if random atoms formed the first cell – it would be dead?

Where did the second third – and all the other trillions of cells come from?

Where did the earth come from?

Why is the world made in such a way that it seems to serve man?

Where did the big bang come from?

How is it possible that random growth and random atoms created similar beings found in nature like animals, plants, humans, rocks?

If everything was random how could you have two beings that reproduce with each other. Did random atoms form a male and a female that can interact perfectly together randomly?

I could go on. But there is a limited attention span of people reading articles.

An honest person answering the questions truthfully will come to the conclusion that it is impossible for the world to be formed by random atoms smashing into each other.

If one does believe it is possible – please take a 1,000 piece puzzle. Put it in a Pizza box and shake it. When it forms the completed puzzle please let us know.

Randomness does not create order.

There is tremendous order in the universe.

A person believes in G-d also encounters  questions like:

Why does evil exist?

Why do bad things happen to good people?

Why do religions – that seemingly represent G-d – commit atrocities?

Did G-d change his mind to form other religions?

if you have any other questions – please feel free to share them with us in the comments.

By the way of all religions only Judaism answers all the above questions satisfactory. But that’s not the Topic today. (Answers in short: No one created G-d. G-d created time; G-d gave man freedom of choice to choose between good and evil; What may appear bad is actually good; People following Judaism did never commit an atrocity sanctioned by the Torah; No. G-d does not change His mind – the Torah’s laws are still in effect – unchanged since they were given 3,300 years ago.)

A person who wants or does not want to believe in G-d has the following dilemma:

If he or she believes in G-d, they will be expected by G-d to follow rules that might not agree with their lifestyle. So I can live a carefree existence – do what I want without feeling guilt.

If he or she does not believe in G-d, they will live a life devoid of prayer, understanding the reason behind world events, having a connection to a higher power, having a greater to turn to in times of need.

I think lacking a meaningful relationship with G-d – by conforming to the atheist doctrine is greatly more painful than living a life with prudent limits set by G-d.