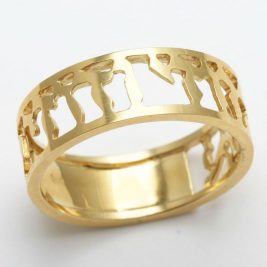 We are in the holiday of Passover – the Holiday of Freedom.

The Goal of A Jewish Holiday

Observing a Jewish Holiday entails that we achieve something – to greater ourselves or others.

Like a trip. When traveling – we think a vacation or outing is merely a pastime  to enjoy life. Though that is part of it, there is a greater goal to your vacation. We are to achieve a certain goal – that with our qualities we will be able to better someone else’s life. Perhaps it is saying a nice word, perhaps it is giving a poor person some money to buy a meal.

On Passover – apparently one of our goals is to become a free person.

Even achieving all the above freedoms – one can still lack freedom.

The Difference Between Preference and Choice

Many a time a person mistakes freedom of choice for preference. Preference is one thing – choice is another.

Preference is choosing between – chocolate and vanilla. A Blue shirt or a Green shirt. Yet a person that exercises his or her preferences is not necessarily free. We would not say a cow that chooses between hay or grass is free.

He prefers grass to hay.

So what is choice? It is having an option of choosing good or evil and choosing the good. That is real choice. For On one hand you want to follow your desire. On the other hand your thought process figures that following it will result in negative consequences. That’s real choice.

So which is right? Apparently – if one thought deeply into each of them they would be able to find many detriments in that mentality.

Let’s take animal rights mentality. Once I gave a class – I asked If you had a million dollars and you could spend it to save the life of a race horse who tripped or an old lady who tripped – how would you spend it? One woman answered – I’d save the horse. Obviously, that woman’s mentality makes her subjugated – because she places the life of an animal above that of a human being.

Take the “same-gender marriage support” mentality. Is it a good thing or bad? Apparently it is bad. Why? Let me ask you two questions. What is the greatest insult you could say to a person. That they should die? Probably. Someone – who supports this type of marriage is condoning these people who marry – not to have common children. Besides their deeds, one of the legacies of a person is the children they leave. Those who support this marriage, condone these people to not leaving a legacy. The second question – does it make you happy when your friend has children or not? Apparently yes. If you like your friend, you like that they have children that have similar characteristics. So those that do support same gender marriage only look on the surface benefits. They do not go into the deeper issues.

So how can you be free? The only one who knows what is ultimately completely good for man is G-d. He thought out all the mentalities and is able to tell what is for the good of man and what is not.

Aligning our thoughts and actions with His desires makes us truly free. How do we know the thoughts and wants of G-d? His thoughts are found in the Torah – the only divine document given in the presence of millions of witnesses.

Following G-d’s laws one attains a higher level of freedom. For our decisions Jews ask a competent orthodox rabbi.

A true story. Once a queen lost her ring. She made an ultimatum. If the one who would find it would return it within 30 days, they would receive a reward. If they would return it after 30 days they would be put to death. A rabbi found the ring within the 30 days. He waited till after the reward period and returned the ring. The queen questioned him: “Why did you wait till after the 30 days? Did you not know about the ultimatum?” He replied: “I knew fully well about the ultimatum. But We have a Torah law from G-d to return lost objects / Hashavat Aveida to their rightful owners. I did not want to return it because of your ultimatum – I wanted to return it because the Torah says to return lost objects.”

Give me freedom or Give me death.

Apparently in the world, people do come upon certain Jewish Torah concepts. John Adams said “Give me Liberty or Give Me death.” That is a Torah concept. Apparently the rabbi in the story above knew that concept. He risked his life to be able to live with the freedom offered in the Torah.

Apparently that freedom described above is the explanation of the Mishna in Pirkei Avot (6:2)

Rabbi Yehoshua son of Levi said: “Every single day a heavenly voice comes out from Mount Horeb [Sinai], & proclaims & says: “Woe to the Mankind for the disgrace to the Torah!” [that they neglect learning & practicing it], for whoever does not occupy himself with Torah is called “reproached” [nazuf] as it says: “A ring [nezem] of gold [zahav] in the nose [af] of a swine is a beautiful woman that turned away from reason.” (Mishle 11:22) & it says: “And the tablets [of the Law – the ten commandments], they are the work of G·d – & the writing is the writing of G·d – engraved [h’arut] on the tablets” (Shemot 32:16) Do not read [it as] “h’arut” [engraved] rather as “h’erut” [freedom]. For the only one who is considered to be a free person is one who engages in Torah Study. And whoever engages in Torah Study, behold they are elevated as it says: “And from Matanah [name of place meaning – a gift – ie, of the Torah] to Nachliel [name of place meaning – My inheritance is in G·d] & Nachliel to Bamot [name of place meaning – high altars].” (Bamidbar 21:19)

Judaism – gives a person the opportunity to be free every single moment.