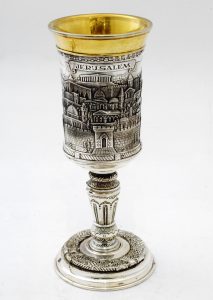 Last week’s Parasha – VaYigash – we have the momentous meeting between the two kings. Yosef (known as Tzafenat Paneach – revealer of Secrets) was the Viceroy of Egypt. Yehuda was the king among the tribes.

In Miketz (the week before’s Parasha / Torah Reading) – Yosef planted his Silver “magical” goblet in the sack of Binyamin. Yosef (who the brothers did not recognize) said he would take Binyamin as a slave as a punishment for stealing. His purpose was to see if the other brother’s would defend Binyamin – Yosef’s maternal brother – thereby showing their regret of selling Yosef. Yehuda comes and defends Binyamin and offers himself as a slave instead. He was prepared to kill or be killed. He did a sincere teshuva (repentance) for selling his brother Yosef.

Afterwards Yosef reveals himself to the brothers. They are afraid, but he bears no grudge against them for having sold him.

How is this possible – one might ask – for him not to have a grudge or harbor hatred against his brothers for having treated him with cruelty?

We saw Yosef’s tremendous trust and belief in Hash-m when Pharaoh took him out of prison to interpret his dream. Pharaoh says to Yosef “I heard You are a great dream interpreter.” Yosef answers “Without Me” – ie, it has nothing to do with me “G-d will answer Pharaoh’s dreams.” Yosef’s complete belief in Hash-m’s providence – allowed him to understand that the actions of the brothers was directed by G-d – for Yosef’s ultimate benefit. The brothers who sold Yosef were only G-d’s agents. If it was not them – someone else would have sold him. Thus that helped him remove the hatred for his brothers from his heart.

Yosef also mentions this point when, after he revealed himself to the brothers, he says do not be angry at yourselves for having sold me – it was all directed by G-d to allow me to feed you during the years of famine.

2. Look at the other’s pain

When Yosef met his brother Binyamin – he hugged him and cried on his neck(s). Rashi explains Yosef saw with “Holy Foresight” that the two Temples that were to stand in the portion of Israel of the Tribe of Binyamin (Jerusalem & Environs) were going to be destroyed because of Gratuitous Hatred. He thus cried for the pain of Binyamin. Feeling another’s pain makes it harder to hate.

3.Look at a person from close

The Parasha starts with VaYigash. “Yehuda Approached.” He approached Yosef not just physically, but emotionally. (see the Ohr HaHaim haKadosh’s commentary there) He tried to make a connection with the person – to understand where he was coming from. At times one stands afar and hates from afar. We don’t understand their trials, their tribulations, their point of view. By doing this Yehuda and Yosef was able to overcome hatred.