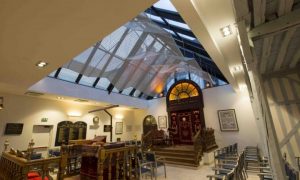 The House of Study

I came to the Beit Midrash / Jewish house of study. A beit midrash is not like a library. In a library – you are asked to speak quietly. A Torah Beit Midrash – you are asked to participate, give your opinions, thoughts, logic, sweat and blood to get to the truth. People speak aloud. The cacophony of voices allows you to concentrate on what your study partner is saying.

If it is a small Beit Midrash – you may be able to dsicern a conversation on the other side of the room. I was listening to a Rabbi speaking to a group of young eager students. He happened to be talking about kidney stones. He said he knew people that were able to pass kidney stones by concentrating on the thought of “Ein Od Milevado” – There is no one but Hash-m / G-d.

If you think of it Hash-m made the body in a way that it heals itself. A cut develops a scab. then the skin returns to normal. Impressive. A person gets a cold – after some rest the body is healed.

Hash-m is the ultimate healer. We say it daily in the Amida – standing prayer – the 18 Benedictions – “Blessed are you Hash-m who heals the ill.” If one has enough faith and prays to Hash-m he can be healed. Obviously – one should also see a doctor and follow their recommendations – provided they make sense. But scientific studies have shown statistically that when people pray for ill people – they are more likely to be healed.

It is more prudent to pray for good health than praying for healing. One needs more merit to be healed than to be maintained with good heath.

Ein Od Milevado – means that everything is Hash-m’s hands. He is the one running the world. The more you believe – the more you open your heart to pray and have faith and love for him and do teshuva (repent) – the greater you open the gates of heaven.

The Torah has 613 commandments – 248 action commandments and 365 prohibitions. The 248 commandments are connected with parts of the body. The 365 prohibitions are connected with the days of the year – meaning we avoid them every day of the year. If one knows the mitzvah that corresponds to the part of the body – he or she can achieve healing – if he does that mitzvah properly. I tried to research the subject – to find the corresponding mitzvot – but was not able to find all of them.

I did hear a story of a person having shoulder pain – how they healed their pain through doing a mitzvah. There is a concept called Torah Therapy.

Apparently Music can also help to heal the psychological state of a person – by uplifting the soul to a higher level.