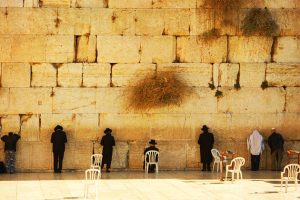 Today is Tisha B’Av. One of the reason’s for the destruction of the Second temple was Sinat Hinam. Sinat Hinam is gratuitous hatred.

The Beit HaMikdash – was destroyed from a domino effect that started from a person being embarrassed in public.

There was a man who made a party. He had a friend named Kamtza.

He told his servant – call Kamtza to come to the party. The servant called Bar Kamtza – the man’s enemy.

Bar Kamtza – came to the party. The Host did not understand why Bar Kamtza was there. He said “I want this person to leave my party.” Bar Kamtza – said “Please don’t send me out. I’ll pay for my meal.” The Host said “No. I want you to leave.”

Bar Kamtza – said “Please don’t send me out. I’ll pay for half of the feast.” The Host said “No. I want you to leave.”

Bar Kamtza – said “Please don’t send me out. I’ll pay for the entire feast.” The Host said “No. I want you to leave.”

He told the Romans – here is a proof – send a Korban – offering to the Beit HaMikdash / Jewish Temple and you will see they will not accept it.

The King sent a Choicest calf – called an Egla Tilsa – as a sacrifice. Bar Kamtza took the calf and made a blemish on the calf before he brought it to the Beit Hamikdash.  In the end – The Jews did not offer the sacrifice – because it had a blemish.

There were ways to save the situation – but Zecahria ben Akulas – dissuaded the people from giving the Korban.

The king saw that the sacrifice was not accepted. He sent his best general Neron Kesar. Nero went to do battle against Jerusalem. Neron was a thinking person. He reasoned – I know that G-d / Hash-m wants to destroy the Temple and He wants me to be the agent to destroy it. He reasoned perhaps if he – Nero – did destroy Jerusalem – G-d would punish him for doing so.

He asked a child for the verse he learned that day – to see if he really would be punished for destroying Jerusalem. The Boy responded “I will send my wrath on Edom – who destroyed my temple.”

He ran away and converted to Judaism. Because he did so – he had the Zechut to have a descendant -the great Tanna – Rabbi Meir Baal HaNess.

Close to the Three Weeks one of my cousins passed away. Rabbi Saban – said at a eulogy – at the 7th day. Emmanuel was peaceful. He shied away from dispute and hatred. He said – we can learn from him to avoid dispute. He asked  : What is Sinat Hinam / Gratuitous Hatred? We don’t just hate a person for no reason – so what is gratuitous hatred? He said – at times someone does something against us – let’s say take our money or insult us. It was decreed from Heaven that we should be punished in that way. The person who did the act was a just an agent.