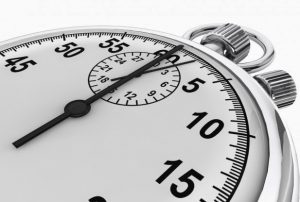 A person needs time to cope. Something good or the opposite happens to him or her, it takes time to adjust to that change. People like to feel safe. They want an unchanging world.

One might steer clear of Judaism at times for that reason. Because they are reluctactant to adhere to the change that Judaism may impose on their lives. People accept atheism for that same reason – it is easier to stick to one’s antiquated ways than to accept a G-d that will require them to adhere to a set of laws – namely the Torah.

At times it is good to resist change – like when one has particular Minhagim – Jewish customs of their fathers. At times the Torah requires change – as when one must improve their character traits to become a better person. The Torah is the ultimate guide to Self-Help & Self-Improvement.

Likewise their are standard times specified for a person to cope. Like if a person just gets married – he or she has seven days to be surrounded by family and friends after the Hupah – Jewish wedding ceremony. This is called the Sheva Berachot – where for 7 days the newly wed couple celebrates their marriage at meals offered by friends and family. . Another standard time to cope is if a person, G-d forbid, is in mourning. They have seven days where friends and family visit them. In a sense – Shabbat – the Jewish Sabbath is a day to unwind and release negativity and rest from the slights of the week.

But some need more time to adjust emotionally to a situation. If a co-worker, a boss or a spouse insults or embarrasses a person, it will take time to calm down. It will depend on the person, the situation, the attitude of the victim. If that same person did something more minor – like interrupted you – the coping time is less. But apparently you are in control of your reaction. You are in control of your coping. You can choose to get over it quickly or let it linger.

The Pirkei Avot / Ethics of the Fathers says it in several places :

In Chapter 2 Mishna 10. They said three things: Rabbi Elie’zer says: Let the honor of your friend be as dear to you as your own & do not be easily angered & return [in repentance] one day before your death.

All these statements point to the fact that one is in control of their temperament. You choose to get angry. You choose to calm down and how long it will take you. It takes time to change one’s temperament – but it can be done. (How? – that’s another post we’ll have to write.)

One way to calm down is to think – “Eventually I’ll get over this unpleasant situation. I might as well get over it sooner than later. Let me go of my anger today.” You’ll be better for it. You’ll feel better for it if you expedite your calming down process.

There was once a Rabbi – that remained calm in worrisome situations. Someone asked him how can you not worry in these situations. He replied “I really do worry. But I worry quickly.”

Worrying about the past present or future may be normal, but unproductive. The past has already passed. The future you never know what will happen. And the present passes in the blink of an eye.