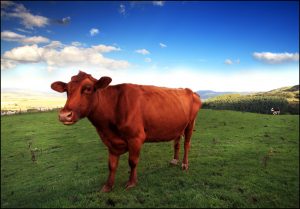 It started with the Purification using the ashes of the Red Heifer.

Miriam, the Prophetess dies. In her merit, the Jews were provided with healthy drink, through a well of water, that followed them through the desert. Her death caused the well to stop flowing. The Jews complain. G-d tells Moshe to speak with a rock to get water. Instead he hits the rock, and is punished by not being allowed to enter the land of Israel.

The Jews complain about the living conditions in desert. Snakes start to bite them. G-d tells Moshe to make a great copper serpent and to place it on a pole and those that would see it would live.

What is the connection?

Being on the Same page as G-d

Apparently, one lesson it’s teaching us is to be on the same page as G-d.

Give G-d Some Slack

One reason for the Red Heifer / Para Aduma was that it served as an atonement for the Sin of the Golden Calf. In the incident of The Golden calf – the Jews miscalculated when Moses was to return. When he was late according to their standards – the Erev Rav / mixed multitude of people who traveled with the Jews – decided to make a Golden Calf. If the Jews were on the same page with G-d this wouldn’t have happened. If the Jews would have given G-d “some slack”, or had a bit of faith – they would have said – “OK, Moses is late, but G-d knows better than us, let’s have some patience.”

We Don’t always have to Understand

When Moses speaks with the rock, he should have said in his mind “G-d knows why I should speak to the rock. No need to hit the rock.”

What does G-d want from us? To believe that He knows best. That’s being on the same page.

G-d of Convenience or G-d of Justice?

I recently read a blog of a person asking others to find a good religion for her. She said something like some religions are cruel, some kill, etc. She then mentioned Judaism – she said – she can’t accept it because it is against same gender marriage, etc. Ok. That’s what she wants a religion of convenience. Not a religion of what’s right in G-d’s eyes, but a religion that is right in her eyes.

I only defend Judaism. I defend no other religion. Only because Torah Judaism is the only religion, based upon a divinely given document that millions of witnesses heard G-d speak out – the Torah. That was only time in History when G-d spoke with an entire nation – a national revelation (as opposed to a revelation to one or several individuals) – when G-d gave the Jews the Torah at mount Sinai about 3,300 years ago.

On the Same page as Parents and Spouses

G-d gave us the Mitzvah of Honoring Parents. That is because he knows that parents are more experienced than children. They know what’s good for us. A spouse sometimes micromanages they co-spouse. Or they contradict them in front of the chldren. Best for parents to get best results from the children is to be on the same page. We decide to turn right or left before we get to the intersection not in the intersection.

Being on the same page as G-d helps us avoid many misunderstandings and troubles along the way. All the commandments that G-d in his Torah gives are for the good of man. Thus being on the same page as G-d – who really knows what’s best for us – will help us avoid many pitfalls and problems in life. For a Jew that is the Taryag / 613 mitzvot / Commandments. For a Gentile it is the 7 Noahide laws – both from the Torah.