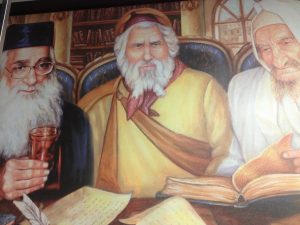 How. Well either one can do it through the powers of purity / tahara or impurity / tuma’. Hash-m gave the possibility to both the good side and the evil side to not disrupt Freedom of Choice. If only good people became rich – people would become good to become rich. G-d wants people to be good because they recognize the inherent value of Good as described by Torah.

Once a girl was kidnapped. The family went to a great and holy sage Baba Sali (Israel Abuhatzeira – who lived about 40 years ago) to ask for a blessing to get her back. He said to go to his son – Baba Meir (Meir Abuhatzeira). Rabbi Meir opened a Torah book – he took a look at it. He said “The girl is in London, on this and this street, in this and this building, on this floor and in this apartment.” The family immediately contacted the authorities in London, relaying the information and they found the girl.

A Book called “The Coming Revolution” By Rabbi Zamir Cohen. He explains a similar phenomena of Mental Telepathy.

They asked R. Meir how he knew. He explained that when G-d created the world he created a light that enabled people to see to the end of the world. He hid it away for people who would merit it. If a person studies Torah for the right reasons – for the sake of heaven – G-d allows people to tap into that light.