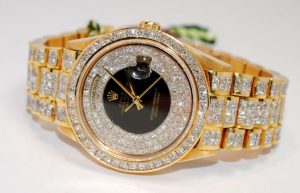 Judaism Has various levels of Belief.

There is Faith. Belief. Understanding. Knowledge.

As opposed to other belief systems – we know that G-d exists. We have had direct contact with Him at Mount Sinai about 3,300 years ago when G-d gave the Jews the Torah. He gave it before Millions of people. Millions of people, heard G-d speaking directly to them. It wasn’t one person who heard and transmitted it to others. Millions of people – all the Souls of the Jews – heard G-d giving the commandments.

So others may say – we believe in G-d. We, the Jews, have first-hand knowledge of the existence of G-d. Our souls were all there.

Some religions say – Believing is enough. Judaism says it is not. One is to know that G-d exists. One can figure it out through rational thought. Anyone can. Not just the highly intelligent, but even the simple man in the street can figure it out.

When a religion tells you just believe – one should be very wary. Imagine you go to a used car dealer and you ask them “can I take a test drive?” and they say – “Just believe that it works.” “Pay the money and then you can drive it.” Most people would not put their money down, unless they actually tested the car. So why does the average person put their life on the line when it comes to religion – when the leaders tell you “Just Believe it.”?

One’s life is much more precious than one’s money.

Judaism’s foundations are rational: An omnipotent G-d created the universe and all that is in it. He is One. There is no other G-d, or helper or part of Him. He is One. He Knows the thoughts of Man. He is kind and changes not his mind.

Religions that say that G-d changed His mind about His laws or His nation – are in essence saying that they believe G-d made a mistake. Pretty Illogical.

G-d never expects you to believe anything that is irrational.

Abraham proved that G-d cannot be physical – a man, animal or object. All of these are limited. Anything that has a limit cannot be G-d. Thus all these cannot be G-d. Comparing G-d to any of these things is basically an insult to G-d.

Once, I believe Turnusrufus (a roman Nobleman or Ceasar) asked Rabbi Akiva “Why does your G-d get angry when someone believes in Idols. Rabbi Akiva answered “Please let me think about it and come back tomorrow.” Turnusrufus came back the next day. Rabbi Akiva greeted him with great honor. “Hello. Welcome to my Home. Thank you for coming again.” Then, Rabbi Akiva called out “Turnusrufus! Turnusrufus! Isabela!” and two dogs came running out. Turnusrufus was enraged, “How dare you call your dogs by my name and the queen’s name!” Forgive me Turnusrufus. You wanted an answer to your question. This is my answer.

G-d is always Good. We are to believe and live that daily – that whatever G-d does is good. Why do good people suffer? At times a person did do some bad in their lifetime or a former lifetime. G-d pays them back in this world so that they will not have to be punished in the next world. Suffering in this world is much less potent than in the next world.

For the wicked – G-d pays them back in this world – so that in the next world they will be paid back their dues.

G-d is in complete control. G-d knows all.

Emunah – is faith in Hebrew.

Emunah is having faith that G-d is the Supreme in Kindness and benevolence. It is living constantly with faith that everything that happens in our life is guided by G-d and for our ultimate good.

Emunah is faith that G-d is ultimately in control and based upon our belief in Him, we can effectuate the positive.

A rabbi was having a discussion with another. One said in order to receive good, you must need & believe. The other rabbi said “No you must just believe that G-d will give it to you.” He continued “I don’t need a gold watch. But I believe that I will receive a Gold watch.” A short while later, there was a knock on the door. It was a man. “Honorable Rabbi, sorry to disturb you at this hour. But our family was discussing how to divide the estate of our late father. We tried to determine who would receive the Gold watch. We couldn’t agree on who in the family would get it. So we decided to give it to you, the Rabbi of the Town!”