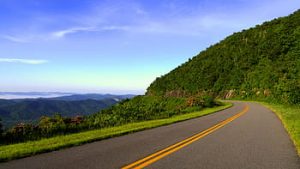 Note: This is one person’s account of how he dealt with COVID-19. Obviously, one should consult a competent physician for treatment of any ailment.

The Man & the Motorcycle

Once a Baal Teshuva – a person who repented from their past ways and decided to follow halacha / Jewish Laws talked to Rabbi Noach Weinberg – the founder of Aish HaTorah – a Yeshiva for Baalei Teshuva. He said “Rabbi – G-d and I are close. Once I was riding on my motorcycle on a narrow road winding around a mountain. All of a sudden a big truck is coming my way. I veer off the side off the road – my motorcycle falls and I grab onto a branch on the mountain side and I hold on until the police came. You see how G-d saved me!” Rabbi Noach answered him “That’s impressive. But who do you think sent the Truck?”

If that’s the case – why did G-d send the the truck in order to save him. Let this young man not encounter the truck? The answer – this is the way G-d communicates with us. He sends us messages daily. Whether we listen or not is in our hands. But if we tune ourselves in – we can hear clear messages daily. Sometimes a person deserves a bad decree due to their actions – but their prayer, teshuva / Repentance to Hash-m & Tzedaka / charity to a worthy Torah cause – changes the decree.

If G-d just let this young man go on his way – he would probably be still be riding his motorcycle into the horizon. This incident gave the person a reason for self-introspection. The boy was intelligent and was appreciative of G-d’s kindness of saving his life and thus decided to learn more about Torah Judaism by enrolling in a Yeshiva.

HaKol Biydei Shamayim – Hutz MeYireat Shamayim. Everything is in the hands of Heaven – except for the fear of Heaven.

Recently, I received a message in the form of the Covid-19. Barukh Hash-m, I survived. Someone in my family tested positive for Covid. Soon after I felt tired. I had the symptoms and also tested positive. Due to fatigue I spent much of my days resting in bed. I could hardly eat or drink. I took a sip here and there of seltzer or some soup. My sense of smell became more attuned. I shunned smells of cooking from the kitchen. I had the chills and getting up at times invoked dizziness. I was reluctant to sit up because I did not want to feel that dizziness. Almost 5 days I spent going from couch to bed.

When my sister heard I was not feeling well – she sent me a a slew of Vitamins, minerals and pills – Zinc, Quercetin (to help allow the zinc to be processed by the body), vitamin C, vitamin D and others. She was in Morocco about a year before – she happened to buy (Azix / Zithromax) Azithromicin (Z-pack) 500 mg. There – Azithromicine is sold over the counter. She sent me the Azithromicin.

I was reluctant to take it but my spouse mentioned that it is most effective if you take it in the beginning of the ailment. So I listened. I took 1 pill the first day and 1/2 pill the rest of the days.

After about five days I was able to get up. I started eating small amount of foods. I avoided – meat, eggs, nuts, beans, dairy and cheese and other proteins. (as it says in Masechet / Talmud Tractate Berakhot 57b). Little by little I was able to build up strength to be able to leave the house after about 10 days of the onset.

Someone suggested I take an IV (Intravenous) for dehydration but I abstained. I took mineral water. Some people who had Covid did do the IV and did feel better from the dehydration.

Fortunately, I didn’t need a respirator or an oxygen mask. Some people who did use the respirator – were caused more harm than good. If the technician who sets it, is not an expert – it may cause harm. Thus in many cases the oxygen mask is more prudent. My father, z”l, who passed on many years ago, was hooked up to a respirator. I am not sure if the hospital’s staff din not regulate the machine properly. One of his last words was “I am exhausted.”

I prayed to Hash-m to heal me. I said I know that my transgressions caused me to receive this. I did some teshuva and did my hishtadloot – effort to be healed and Hash-m sent me a refuah. It was a tough message – but Barukh Hash-m – thank G-d I survived.

Afterwards, since I was in bed for at least 1 day – I did the birkat ha Gomel at the Torah. Birkat HaGomel is said after an Aliya at the Torah to thank G-d for saving a person from a dangerous situation (Kol “HaHayim” Yodukha Selah / All the Living will Praise You (Hash-m) forever. – is the verse that alludes to this blessing. It is said by H’avush – a captive. Yisurim – a person who was ill in bed. Yam – someone who traversed a sea. Midbar / Mem – a person who went through the Midbar / Desert.)

We learn the way to life in the Yom Kippur services – Teshuva, Tefillah and Tzedaka save a person from a bad decree. I was fortunate that my and my beloved ones tefilot / prayers were answered.