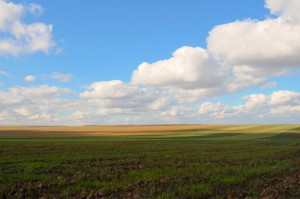 A common scene. It is morning. You walk into an elevator full of people. You belt out a hearty “Good Morning!” Silence – Except for that corner person that grumbles something under his breath.” You judge him favorably and think at least he grumbled “Good Morning” or so you think.

Some people are grumpy because they are hungry. Eat a good breakfast with whole wheat bread. The satiety will make you more personable in the morning. A Rabbi suggested to husbands (apparently the same holds true to wives) to eat a snack before they arrive home from work. Thus if they arrive home and find dinner is not ready, the house a mess and the children bouncing balls on the walls – they will be able to better handle it.

Some situations rub us wrong. To some it might be the wrong price rung up at the cash register, to others that dinner is not ready, and to others that children wasting time on the iPad. Imagine what would be the most productive and positive way to deal with the situation and prepare mentally to do so in that situation. When the situation arises, you will know how to handle it.

Why are people grouchy in the morning?

I don’t know. I remember when I was grouchy in the morning and grouchy if someone woke me. I still become grouchy at times, but Now I am more calm.

It could be because I started doing Netilat Yadayim (ritually purifying hands with water) in the Morning. The Torah tells us that when we sleep one of the parts of the soul ascends to be judged. When it leaves evil forces attach themselves to the body. Apparently this may be one reason why a person feels grouchy when they awake, even if they nap a while.

One solution to the grouchiness : do Netilat Yadayim.

Upon Awakening from sleep or after one’s needs, Take a Wash Cup Keli (vessel) that holds water – preferably one that has two handles. Pour a sufficient amount of water into the vessel, that allows you to completely cover each hand three times with water. (They sell these wash cups usually at a Jewish Bookstore). Pour enough water – that it even reaches the wrist bone – on the right hand. Then do the same for the left. Then Right, then left. Then right, then left. Some add an addition set of pourings to remove the impure water.

Some men immerse in a Mikve – a pool of purifying waters – regularly. That also removes some of the impure forces from the body as well. I did feel somewhat upset today at someone who took something from from me. After the Mikve I felt less vengeful.

The less grouchy you feel, the less likely you will be bothered by other grouches in the morning.

Another way to relieve the Grouchies is to recognize that everything that God does is for the good. When Someone insulted King David he said, it is not that man that is sending me this insult – it is G-d. He recognized all that happens is from G-d and that all that G-d does is for the good. An insult may be a manner for us to learn to be a bit more sensitive to others.

One can reach higher levels of Self Improvement through Simple Sufferings – provided one learns from them.

Some people are bothered by the “what if?” thoughts. Some are healthy – those that help to prepare properly for the future. Some only help a person to worry. Obviously,
if one banished the negative thoughts, one will be able to handle life better. Think that G-d is in control and he is our Loving Father. A Father wants good. Think that it will be good and it will be good.

Grouchiness is related to stress. Be Cool.

Some people like to blame others. It relieves you of your responsibility, but makes you bitter inside. release yourself from the shackles of animosity and think of the good in your life.

Think that life is good and it will be good.

When upset by someone else’s actions towards us – we show that their approbation is important to us. The Torah wants us to be so self confident that the actions of others towards us have no bearing upon our self-esteem.

The Rambam / Maimonides tells a story of once a person was sleeping under a staircase on a ship. A rich man, wanted to show his disdain for the poor person. He proceeded to urinate on him.

The Rambam relates that that was one of the greatest days of his life – because through this occurrence he realized that he reached a level to be undisturbed by the actions of others. It was him who was in control of his actions. His actions were determined by his thoughts not by his heart. He was a man of action not of reaction. He was a free man.

“The only one who is considered to be a free man is one who occupies himself with Learning Torah.” (Pirkei Avot 6:2)

is Through learning Torah a person internalizes the priorities in life – the closeness to G-d and spiritual advancement – and achieves freedom from material and emotional dependencies. Through the lessons of Torah and working on oneself was this person to achieve the level of self-control and emotional freedom.

King David was on such a height that he asked for suffering. For through it, he would feel solely dependent and attached to G-d. His priority in life was to reach the ultimate close relationship with G-d.

Through Torah works – we learn the way to handle all kinds of situation. Mussar / Jewish Ethical works – – help us to have a proper perspective on life to be able to better to handle the ups and downs. This is the long term solution, to read, study and internalize the lessons that allow us to better ourselves daily.

Classical Mussar Works include Mesilat Yesharim / the Path of the Just (by Moshe Chaim Luzatto), Shaarei Teshuva (Gates of Repentance), Chovot HaLevavot / Duties of the Heart, Orchot Tzadikim / Paths of the Righteous, Derech Hash-m / the Path of G-d, Cheshbon HaNefesh / Accounting of the Soul. Pirkei Avot / Ethics of the Fathers also contains pearls of Wisdom and teachings in Mussar for Self-Improvement.

Giving is better than receiving.

When we give to others and they don’t return in kind apparently our giving was with expectation of receiving. A high level of kindness is done by caring for the body of the dead – for one expects no favors from the person in return. If we give purely to give – we await nothing in return. Our Gift is the ability to give. Receiving something in return is secondary or non-consequential.