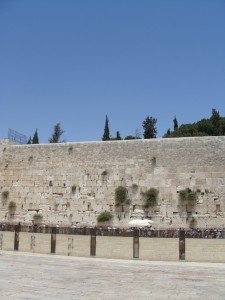 Here is a resume of some of the points of how the Torah brought the world to a greater state of perfection.:

1. Monotheism – Torah taught the belief in One G-d. People used to commit Idolatry on a larger scale – which included human sacrifices – and anarchy.

2. Respect for Human Life – The Torah gave the Laws to nations to not murder. Now it is on the books of all civilized nations

5. Respect for Monogamy – Respect of the Sanctity of Marriage and Family

6. Respect for the Body of Others – In Rome the decadence was such that respect of the married, men, women and children was not a value.

7. Not causing pain to Animals

We can see the development in perfecting the world by paralleling them with the 7 Noahide commandments given to all humanity by G-d in the Torah.

1: Key Values for a Perfect World – What is the source of our utopian world vision?

2: Value of Life – Today’s violence in sports is child’s play compared to many ancient cultures.

3: War & Peace – Nations often employ the law of the jungle: Might makes right.

4: Justice for All – Greek democracy was far from “one person, one vote.”

8: The Jewish Perspective – He who saves one life is as if he saves an entire universe.

9: Jewish Justice & Education – The Jewish king was not above the law; rather he exemplified it.

11: Monotheism and its Implications – America’s Founding Fathers turned to the Bible for inspiration.

12: Looking Forward – Everyone is part of the whole, responsible one for another.

Rabbi Kenneth Spiro. also has an Audios and more on Jewish History and the subject of WorldPerfect – how the Torah brought the world to a greater state of perfection.