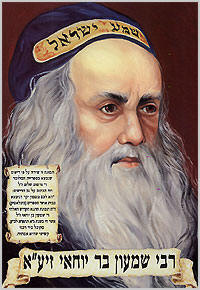 The Holy Tana – Rabbi Shimon Bar Yohai’s Hilloula (Yartzeit Celebration) is the 18th of Iyar, this past Wednesday Night.

Rabbi Shimon bar Yohai was a Tanna – a Great Rabbi, quoted in in the Mishna (Successor text of the Oral Torah) Text. On Lag BaOmer, we celebrate his Yartzeit (Day of Passing). He was a rabbi that attained superhuman heights. He reached such a high level of being, due to his study of the Torah, that he told People to celebrate his death – for he accomplished his potential in life. Thus, he told his followers to celebrate his life on his yartzeit.

RABBI SHIM’ON BAR YOHAY- -RASHBY. A great historical figure. Lived in hard historical times during the Roman occupation of Judea. Because of his criticism of the Roman occupiers, they put a price on his head. To escape them he hid in a cave with his son, Rabbi Elazar, for 13 years. During this long stay in the cave they studied together the mysteries of the Torah, and RASHBY is credited to have written the HOLY ZOHAR, the major text of KABBALAH. On LAG BAOMER, (18th of Iyar) his loyal followers flock to his tomb in Miron where they celebrate his HILLULA with much fanfare. Next to MOSHE HABBENU, his name is the most revered one among all Sephardim. In his honor, Sephardim chant the song BAR YOHAY every Friday night before Kiddush.

(Excerpt from a Text Written by. Rabbi Haim Toledano, z”l)

Hundreds of thousands celebrate the Hilloula Celebration of Lag BaOmer (the 33rd Day of the Omer) by purchasing candles auctioned-off in his memory and lighting candles in his memory, learning his Torah and visiting his tomb in Meron, Israel. In Israel, children collect scraps of wood to make a large pyre in order to burn on the day of his Hilloula.

One of the Explanations of custom the benefit of purchasing the candles of the righteous people is found in the following excerpt from Sefer Ahavat Haim regarding faith and Lag Baomer:

“On the night of Lag Ba’omer we are accustomed to selling candles and we announce the names of many [Tzadiklmj as well as [each person] who purchases and lights the candle in their honor:

I heard that at that moment, that particular Tzadik comes down from the world of truth, gazes at the face of that person [who purchased a candle in his name], and the Tzadik [then] departs keeping [the sponsors] name and [facial] features [in mind]. When that person [eventually] dies, that particular Tzadik comes and speaks in his defense, and says This man spent such and such an amount of money and lit candles in honor of the Tzadikim although he never saw us and he does not recognize us. [He did this] only because of his [pure] faith. .. [These words of defense are heard in heaven and the person] is exonerated. . .”

Light a candle in his memory and say a prayer to Hash-m that in his merit you will be answered.