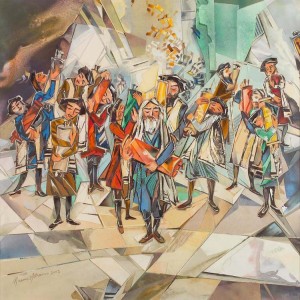 One assignment was to draw a design and complete it within a certain amount of time. When time was up, we had to stop with whatever drawing we had. It could have been half finished but we had to stop.

It was a race against time, but also an exercise in using our skills.

Life is similar to that exercise.

It is a race against time to perfect oneself.

The way that we end up is the way we remain in the afterlife.

The good that we have done becomes set in eternity. Afterwards, we cannot continue to build.

Many a time we want to do good.

But we are sidetracked. We want to give a dollar to a hungry poor person, but then a thought enters our mind – “why should I give if he is just going to use it for drugs.”

Someone wants to give a sizable donation to a worthy Torah cause, then he thinks “I can’t do that – my old teacher from Hebrew school was mean to me.”

Or sometimes it just implants negative thoughts into us to demotivate us : “You are no good. You are worthless. Just give up.”

When encountering the negative, G-d wants us to strengthen ourselves to do the positive. Counter with positive thoughts. “I can! I am good! I should give! People do love me!” Find reason to do the good that will outweigh the bad.

It is so that life will be balanced – if we knew how great the reward was for a simple good deed, we would quit work and do good deeds all day. (Working, can also be a good deed with the right intentions.)

The good inclination – gives us the idea to do good or not to do bad. The Evil inclination gives us ideas to do bad or not do good. We have freedom of choice – freedom to chose between the good an the bad.

The Arm Against Bad

So what is our arm to choose that which is good?

If one was to think out their actions, they would do only good.

Imagine a person was in the times of pogroms against the Jews. The church would rile up the common folk to destroy, pillage and harm on certain holidays or just out of hate. A gentile who would follow his heart would join the fun. A person who would use his mind would think – is this the right thing to do to hurt innocent people? If he would think further – he would discount the credibility of his religion in his eyes and seek something more just. He or she would think – is this what G-d really wants from me – to hurt his chosen people.

If he were really sincere in his search for truth, he would come to the conclusion that he should be following the Seven Noahide laws for world peace for all people because G-d said to follow them in the Torah. A person who is honest can look at the history of their religion and see if they approve of the acts of the leaders and devotees to that religion. In essence a person who follows a religion – condone in a sense – the acts that were done through that religion.

Or let’s take a simpler example – a person that speaks badly about others. He or she gets pleasure from speaking about others badly. In essence, it is their emotions that are driving them. If they were to reflect, they would think – look how much time I am wasting talking about others, when I can be using that time to do good for the world.

Detailed Laws exist concerning not speaking badly about others and not listening to negative speech. In the long run a person who avoids negative speech not only gets a Mitzvah, but they also live a better life.

I sometimes wonder why people listen to the daily news. Obviously, one can be informed about world events, but certain news sources are so depressing they put a damper on life. Choosing a news source that has a positive outlook – like Mishpacha Magazine – can help you get news without being left with depressing thoughts. Just like negative speech.

If you see your entourage is speaking negatively, you can buy a book – like Positive Word Power – By Rabbi Zelig Pliskin or ask an Orthodox Rabbi to teach the laws of Lashon HaRah to a small group of friends. In the long run you will see life in a more positive light.

Thus it is important for a person to define one’s role in life. When one defines their role to do as much good using their particular talents and abilities – the menial tit-for-tat of life becomes something to avoid and reaching a higher good takes precedence.

Live and Learn. Learn and Live

Learning laws about refraining from negative speech / Lashon HaRah . I heard that if one has a negative quality that they wish to overcome, they should learn laws pertaining to that subject. If one arrives late to synagogue, they could learn laws about coming on time to synagogue. If one has a bad temper, they can learn Torah works concerning the destructiveness of anger.

G-d gave us free will to chose what is right and what is wrong. My Rebbe, used to say the mind should be in control of the heart not the other way around. Obviously, if the Torah is their guidepost, they will be able to overcome the evil inclination.